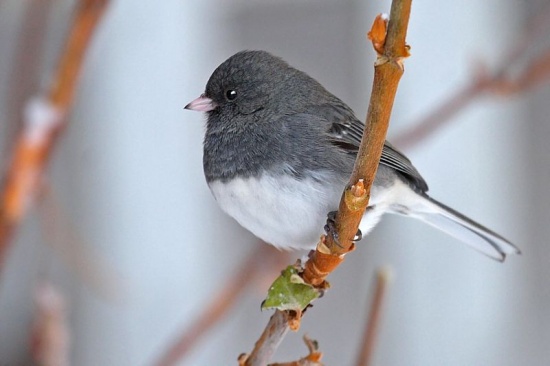 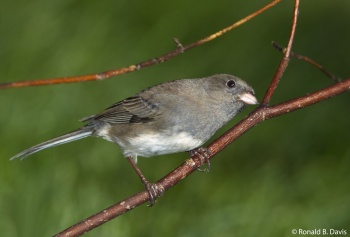 5-6 1/4 in (13-16 cm)
This species shows much geographic variation in color, with many recognized populations or subspecies. All are easily recognizable as Juncos, due to the body shape and behavior.

The subspecies are named and grouped variously depending on the authority listing them, but the following four major designations are common:

Found in western populations. The male has a black hood, chestnut mantle, and white underparts with buff sides. The female has a gray hood.

The male has a dark slate-gray head, upper breast, flanks, and upperparts, with a white lower breast and belly. Both forms have pink bill and dark gray tail with white outer tail feathers conspicuous in flight. 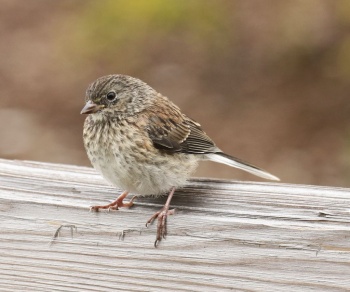 Populations in the Southwest. Gray overall, with reddish-brown back.

Northern birds migrate further south; many populations are permanent residents or altitudinal migrants. In winter, juncos are familiar in and around towns. The "Slate-coloured" Junco is a rare vagrant to western Europe and has wintered in Great Britain, usually in a domestic garden.

The best-known species of junco, a genus of small American sparrows. Until recently the many geographical forms of this bird were considered separate species, but since they interbreed wherever their ranges meet, they are now considered one species.
Guadalupe Junco was formerly included in this species. 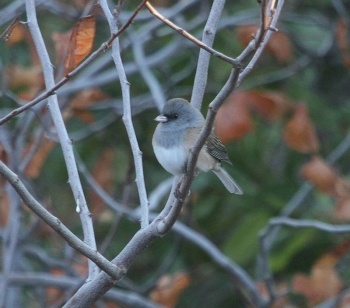 There are around 14-15 subspecies[1]
Slate-colored Group 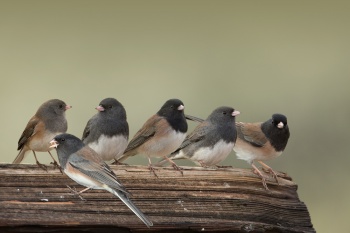 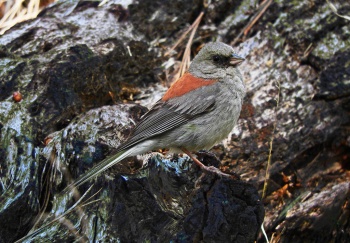 This lively territorial bird is a ground dweller, but also moves through the lower branches of trees and seeks shelter in the tangle of shrubs.

The 3-6 pale bluish or greenish eggs, with variegated blotches concentrated at the larger end, are laid in a deep, compact nest of rootlets, shreds of bark, twigs, and mosses, lined with grasses and hair, placed on or near the ground, protected by a rock ledge, a mud bank, tufts of weeds, or a fallen log. Incubation lasts about 12 days by the female only. Young juncos leave the nest from 10 to 13 days after hatching. These birds often have 2 to 3 broods a summer.

Mostly migratory; males migrate earlier than females, and tend to winter farther north in the East. Some populations resident.

Search for photos of Dark-eyed Junco in the gallery

Search for videos of Dark-eyed Junco on BirdForum TV