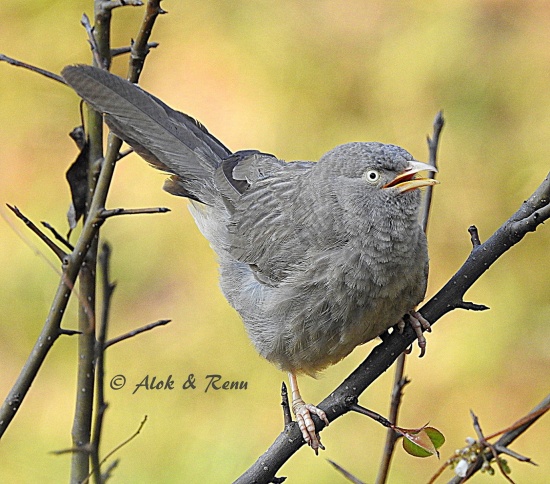 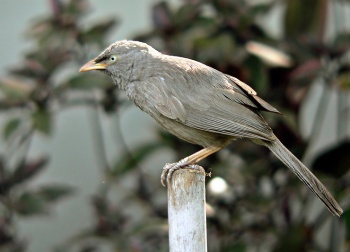 25cm (9¾ in). The most widespread Turdoides-babbler of the Indian Subcontinent.

Other plumage markings are variable and diffuse.
Juveniles are browner-tinged overall.

Yellow-billed Babbler has pale bluish eyes and pale panel on wing. All other Turdoides-babblers of the region don't have a yellow bill and most of them are much more streaked.

India, Nepal, Bhutan and Pakistan.
Common in most of its range.

May form a superspecies with Orange-billed Babbler and has been considered conspecific with it.
The scientific name was formerly spelled Turdoides striatus. 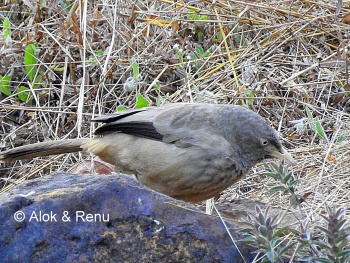 Found in a wide variety of habitats from open and secondary forest to scrubland, plantations, orchards, hedges in cultivation or bushes in waste ground..
Locally up to 1830m.

Feeds mainly on insects but takes also frogs, grain, seeds, berries and nectar.
Gregarious and often in big groups of 6 to 12 birds or in mixed-species flocks, sometimes mixing with Yellow-billed Babbler. Usually foraging on the ground. 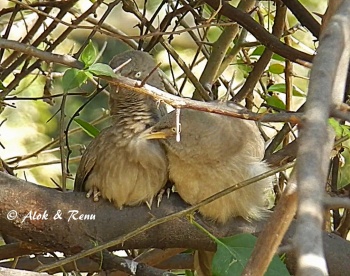 Breeding season all year, peak time from February to October. The nest is a loose, deep or shallow cup, made of grasses. It's placed in a bush, hedge or in a small tree. 3-7 deep greenish blue eggs are laid.
Resident species. 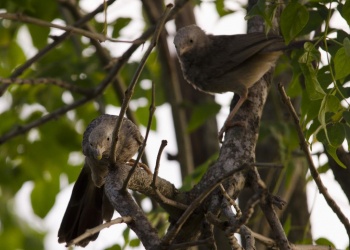 Search for videos of Jungle Babbler on BirdForum TV