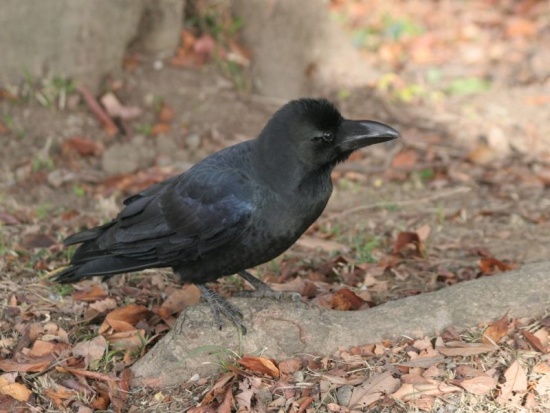 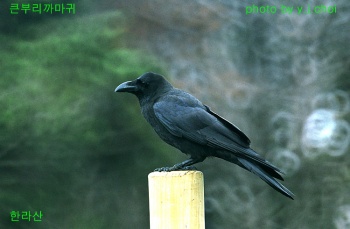 Very similar to Slender-billed Crow. Note the concealed culmen base in Large-billed Crow, the longer tail in flight and the more obviously fingered primaries. May also be confused with Carrion Crow and Common Raven in parts of its range. 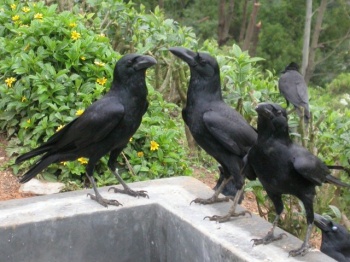 Found in south and east Asia.
From Afghanistan over the Indian Subcontinent, the Himalayas and central, south and east China to Korea, the far east of Russia to Japan. Also to Burma, Thailand, Indochina, peninsular Malaysia to Sumatra, Java, Borneo and the Sundas to Timor and Wetar. A regional form occurs on the Philippines.
Common and widespread in most of its range. Rather rare in Borneo. Records from Iran, north Afghanistan, Turkmenistan and Tajikistan are probably erroneous.

Unresolved. Varies by authority. Pending further research, may be split into as many as four different species. 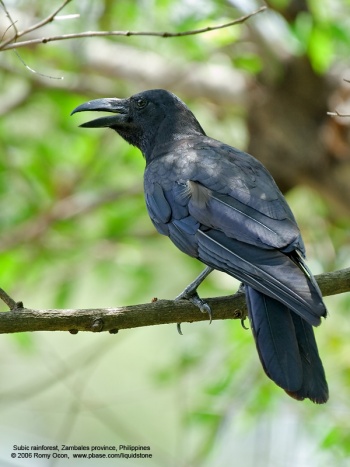 This is a polytypic species with 13 subspecies currently recognized[1].

Woodland, parks and gardens. In north of range often near rivers and settlements near rivers.
Up to 2000 m in Sri Lanka, 4500m in Sikkim and 5000m in Tibet. Known to follow mountaineers as high as 6400m.

Usually seen in pairs or family parties, often associating with other birds like House Crow

The nest is a platform of twigs, usually high up on a tree with a preference for tall conifers like Fir or Pine. There are normally 3-5 eggs laid and they are incubated for 17-19 days. The young are fledged usually by about the 35th day. 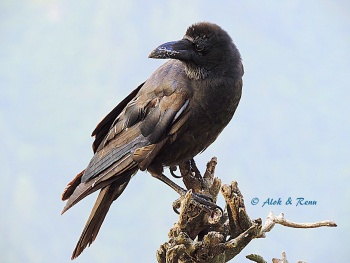 A resident species. Birds of northern populations move to the coast (ice-free river-mouths) in winter.

Complex, with variations within the vocabulary of each subspecies. Japanese birds give a variety of laughing and harsh, clear calls, hoarser than [Carrion Crow].

Search for photos of Large-billed Crow in the BirdForum Gallery