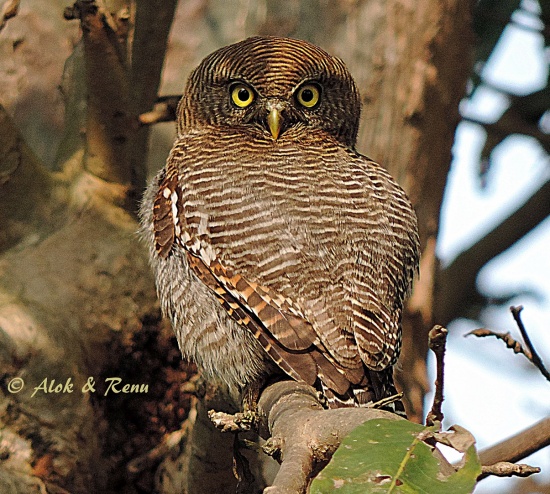 20 - 24cm
A small owl with a round head. Entirely finely barred, including flanks. Facial disk also barred with white eyebrows. Dark brown above with rufous wings. Yellow eyes.
Malabarium in the south is much more rufous, especially the head, and generally darker.

May be confused with Asian Barred Owlet and Collared Owlet. Differs from first in smaller size, rufous primaries and paler appearance. Both species also have streaks on their belly which are lacking in Jungle Owlet. Collared Owlet is usually found at higher altitudes.

India and Sri Lanka. From the Himalayan foothills south to Sri Lanka. No confirmed records in the northeast.

The latter may have species status, further study needed.

The species is often found in small groups and they are very vociferous at dawn and dusk. Easy to see at day.

Breeding from March to May. Lays 3 eggs, only 2 in Sri Lanka.

Recording by Alok Tewari
Dwarahat, Dist. Almora, Uttarakhand, Alt. 5100 ft above MSL, India, April-2015
Call given in late evening, before Sunset, echoed through the Himalayan valley.
Another louder call, recorded in the same vicinity, in the file below :

Search for photos of Jungle Owlet in the gallery

Search for videos of Jungle Owlet on BirdForum TV