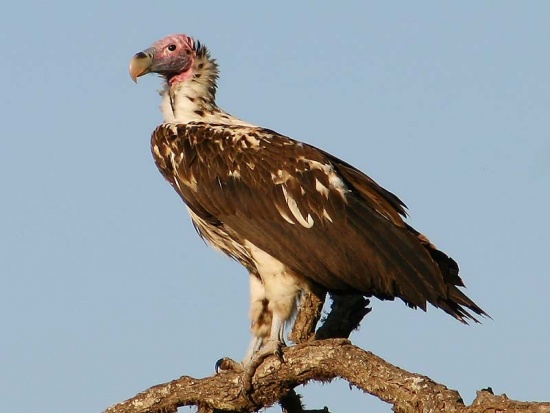 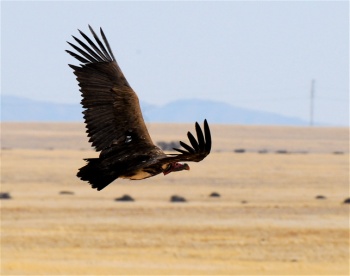 Closely related to Eurasian Black Vulture (and in the past, often included in the same genus Aegypius), but does not usually overlap in range (both occur as vagrants in northern Arabia); very similar to it in structure, best distinguished by paler underparts. Rüppell's Vulture, White-headed Vulture, and other members of the genus Gyps can be confused at long range.

Like all sub-saharan vultures, now listed as Endangered, due to a combination of habitat loss and illegal poisoning by poachers. Widespread but scarce in sub-saharan Africa from Senegal east to Ethiopia and northwest Somalia and south through the eastern half of the continent to the Cape but absent from the broad belt of Brachystegia woodland across Angola, Zambia and Mozambique.

Adults are sedentary but young birds may wander widely. Small numbers are regularly seen in southern Egypt especially between Aswan and Abu Simbel and still occasionally recorded in Israel. Formerly more widespread as a breeding bird in North-West Africa but now largely a vagrant. Also recorded in Syria, Jordan and in Libya.

There is one 19th century record from France and possibly also recorded in Spain.

The species is usually regarded as monotypic but sometimes split into two-three races:

Majestic. Glides and soars on flat wings. When perched on tree, has a rather level posture with head up and held back between or above shoulders; when on ground, body more upright.Walks freely.

Loosely colonial in some areas, solitary breeder in others, nest is built in the top of an acacia or on a cliff ledge.

Search for photos of Lappet-faced Vulture in the gallery