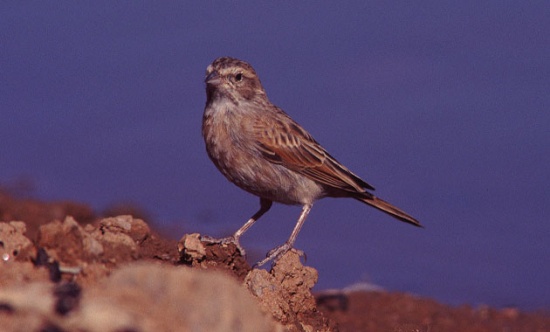 A buff-coloured bunting with dark brown wings and tail. Distinguished from larks by its long tail and short legs; it also hops rather than walks.

A third subspecies, E. i. eremica has been described1, but is not recognised by all authorities.

Shy and restless. Gregarious; often in large flocks. Associates with sparrowlarks and other canaries. Forages on bare ground for seeds of grasses and shrubs, and insects.

Monogamous. The nest is a loose cup built of twigs, lined with rootlets and grass awns. Two to four eggs are laid September to May; in dry areas, timing depends on rainfall. Eggs are incubated for 11-13 days, and the nestling period is 12-13 days.

Search for photos of Lark-like Bunting in the BirdForum Gallery