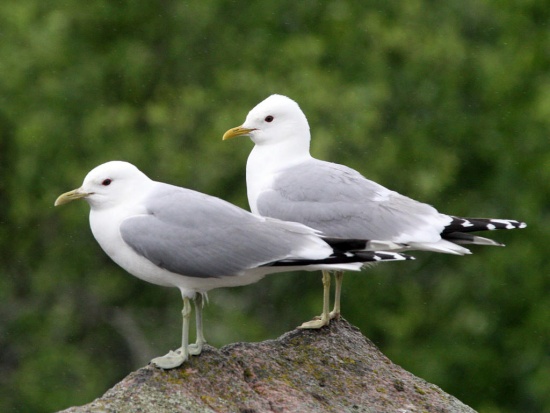 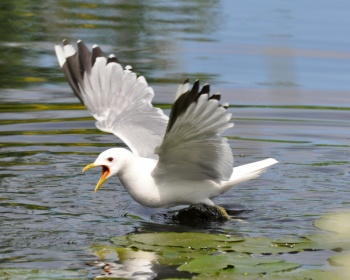 Breeds in northern Europe, northern Asia, and northwestern North America; migrates south during the winter. See subspecies, below, for detail.

Its closest relative is Ring-billed Gull, and secondarily to the entire Herring Gull complex of large white-headed gulls. 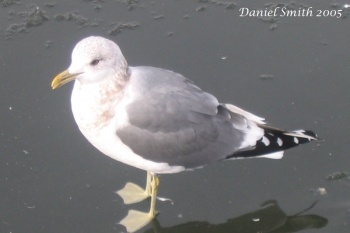 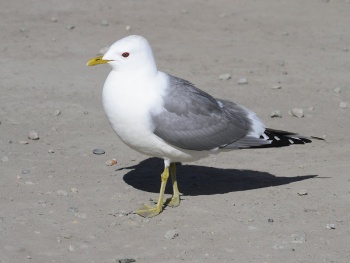 Subdivided into four subspecies[1], one of which probably better treated as a separate species[2]: 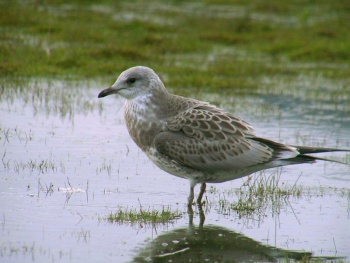 The once-split subspecies L. c. brachyrhynchus has now again been lumped with Larus canus[1]. The common name Mew Gull is recommended by all the major taxonomic authorities for the merged species, despite this not being the name of the nominate subspecies, and being far less widespread and abundant than Common Gull. The species continues to be known as Common Gull in Europe and Asia. The only world-wide authority to recognise the split of Mew Gull from Common Gull was the 1996 installment of Sibley and Monroe[3], though they are also treated as separate species in Olsen & Larsson's monograph (2003)[2] and in a major study by Adriaens & Gibbins (2016)[4], a trend likely to increase further in the future.

Natural habitat by lakes and marshes in the breeding season and along coasts in winter; within last century or so has become strongly adapted to human commensalism, feeding on ploughed fields, meadows, and sports grounds, or in streets on human-supplied food, and using roofs in urban areas (particularly industrial estates) to nest and rest. Outside of the breeding season, often flies often long distances (up to 20-30 km) every evening to roost at sea or on large lakes and reservoirs.

Omnivorous. They scavenge as well as hunt small prey.

They make a lined nest on the ground on islets in wetlands or on moorland, on large buildings (flat-roofed factories), or rarely, in a tree.

Search for photos of Mew Gull in the BirdForum Gallery

Search for videos of Mew Gull on BirdForum TV