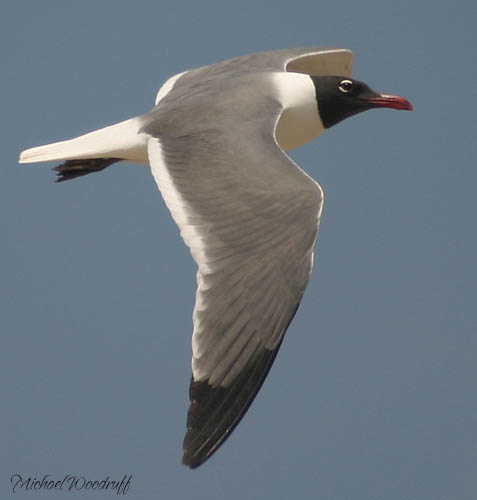 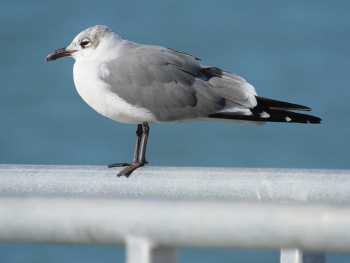 Bonaparte's Gull is smaller with much lighter gray back, smaller black bill (in all plumages), and with almost no white on primary tips.
Black-headed Gull is slightly smaller and shorter-winged with much lighter gray back, less extensive hood, smaller bill, and with a white forewing blaze and little black on the primary tips.
Franklin's Gull is a slightly smaller dark-backed hooded gull with larger white primary tips (even in juvenile plumage), much less extensive black in wingtips when flying, broader eye-arcs, and smaller thinner bill. Juvenile Franklin's have whitish neck (instead of gray).

A partial migrant. It is a year-round resident on the eastern and southern coastline of the United States from Delaware to the southern tip of Texas, throughout the Caribbean, the east coast of Mexico and Central America, and locally on the west coast of Mexico and the north coast of South America.
Additionally a breeding summer visitor north to Nova Scotia in Canada, and winters on both coasts of South America south to northern Chile and the Amazon mouth in Brazil.
Rare away from east coast and south coast of the U.S. but with records in almost every state.


Vagrant to Europe with records nearly annually in the UK.

It was formerly placed it in the genus Larus. The species name atricilla ('black-tailed') shows that Linnaeus's type specimen was a first-year bird.

This is a polytypic species consisting of two subspecies[1]:

Omnivorous - diet includes fish, insects, carrion, mollusks, eggs, worms, young birds, etc. Collects food by foraging on beaches and shallows; does not usually submerge in search of food like some other seabirds.
They are scavengers as well as hunting small prey, and readily take human-supplied food such as fish waste, bread and french fries. Many have learnt to steal food (kleptoparasitism) from Brown Pelicans and other seabirds.

A large nest is built of grass and placed on the ground. 3-4 greenish eggs are laid and incubated for about 21 days.

Search for photos of Laughing Gull in the gallery

Search for videos of Laughing Gull on BirdForum TV