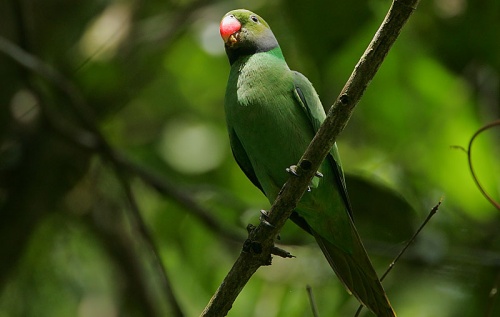 <math>Layard’s Parakeet is a bird of forests, particularly at the edges and in clearings, and also gardens. It is locally common. It nests in holes in large trees, laying 3-4 white eggs. This is a green parrot, 29 cm long with a tail up to 13cm. The adult has a bluish-grey head and back, separated by a green collar. There is a broad black chin stripe and the tail is blue tipped yellow. The upper mandible of the male’s bill is red, and the lower mandible is brown. The female is similar, but has a black upper mandible. Immature birds are mainly green, with a dark red bill. Layard’s Parakeet is less gregarious than some of its relatives, and is usually in small groups outside the breeding season, when it often feeds with Brahminy Starlings. Its flight is swift and direct, and the call is a raucous chattering.

Forests, Gardens, Quite common in in the High Country & forested humid arrears in the low country. Uncommon in high elevations

It undergoes local movements, driven mainly by the availability of the fruit, seeds, buds and blossoms that make up its diet. Its cry is quite distinctive.It nests in holes in large trees, laying 3-4 white eggs.

Search for photos of Layard's Parakeet in the BirdForum Gallery