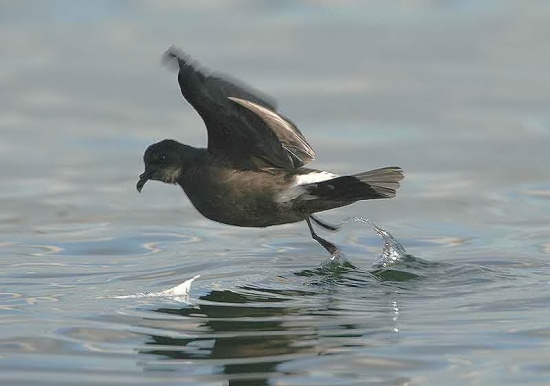 A small seabird of the tubenose family. It is named after the British zoologist William Elford Leach.

8-21 cm. Dark plumage and white rump with a black line through it. Forked tail

This is a polytypic species[1] consisting of 2 subspecies.

Breeds in the north Pacific, from northeastern Japan through the Kuril and Aleutian Islands to southeastern Alaska, south to central California (Farallon Islands); and in the north Atlantic from the northeastern USA (Massachusetts, Maine) and eastern Canada east to Iceland, the Faeroe Islands, northern Scotland, and northwestern Norway;

Close to the sea in well concealed areas such as rock crevices, shallow burrows.

Can turn up on lakes and reservoirs, many miles inland, as a result of storms

1 white egg is laid. Visits the nest only at night

Search for photos of Leach's Storm Petrel in the gallery

Birdforum thread: How to see a Leach's Storm Petrel in the UK: [[1]]