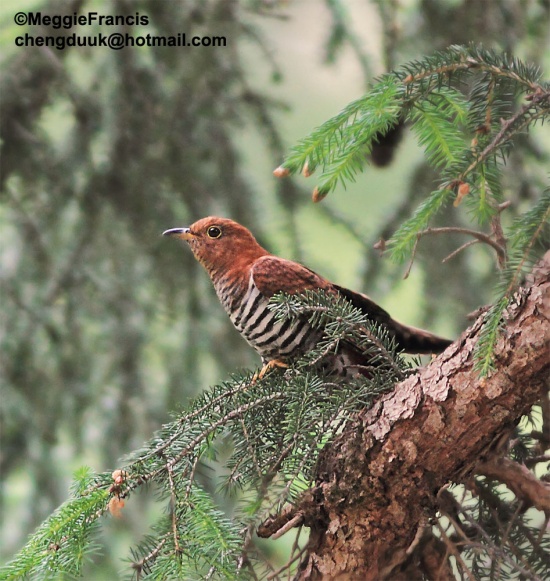 Females are similar, sometimes with a rufous washed breast. Occurs also in a rufous morph (both sexes).
Juveniles are slate-grey with white bars above, a black face with white bars and a barred black and white breast and belly.

Oriental Cuckoo and Himalayan Cuckoo are larger and have different calls.
Very similar to the Madagascar Cuckoo; probably not always safely distinguished in the field. Thin bars, weakly marked undertails and a pale head are good features for Madagascar Cuckoo.

Breeds from northern Afghanistan and northern Pakistan east trough the Himalayan foothills of India and Nepal to Bangladesh to northern Burma. Also across China to Ussuriland (Russia), Korea and Japan.
Winters in peninsular India, Sri Lanka and eastern Africa.
Common to fairly common in its range.

This is a monotypic species[1].
Subspecies assamicus is generally considered invalid[3].
Forms a superspecies with Madagascar Cuckoo and both are sometimes treated as conspecific. Sunda Cuckoo has been placed in this species sometimes, but present evidence does not support this.

Search for photos of Lesser Cuckoo in the gallery