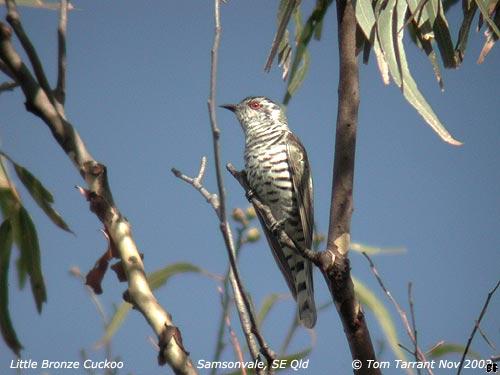 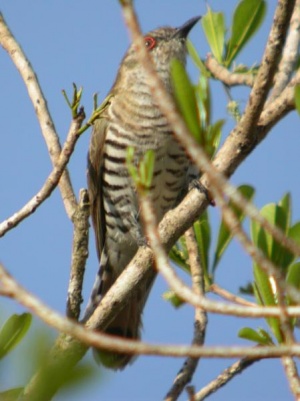 Females similar but with tan to yellow or white eyering and brown eye.
Juveniles are duller with grey-brown upperparts and white to rufous underparts with traces of barring on flanks. 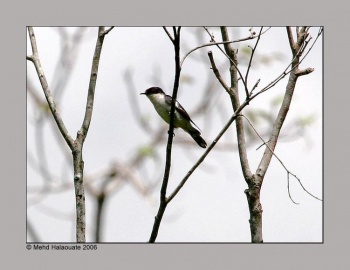 From extreme southern Thailand to peninsular Malaysia and Singapore east to Sumatra, Java, Borneo, southern Philippines, over many Indonesian islands to New Guinea and northern Australia.
Locally common in Australia, scarce in the western part of its range. Some subspecies threatened due to habitat loss. 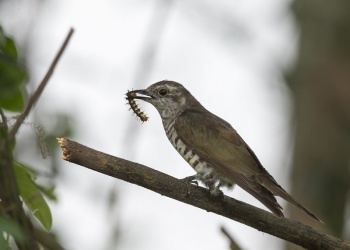 13 subspecies are listed, including one that has not been officially described yet:

Birds on Timor belong to another, yet undescribed subspecies.
crassirostris and salvadorii used to be split as Pied Bronze Cuckoo but are included here following Clements[1] and the IOC.
It's sometimes placed in the genus Chalcites.

Moist forest, including secondar growth and mangroves. Also in towns and gardens.
Usually found in dense lowland vegetation.
Found from sea-level up to 1400m, in New Guinea mainly up to 500m.

Feeds on insects, mainly on caterpillars, beetles and bugs.
Forages in the tree canopy.

Search for photos of Little Bronze Cuckoo in the gallery