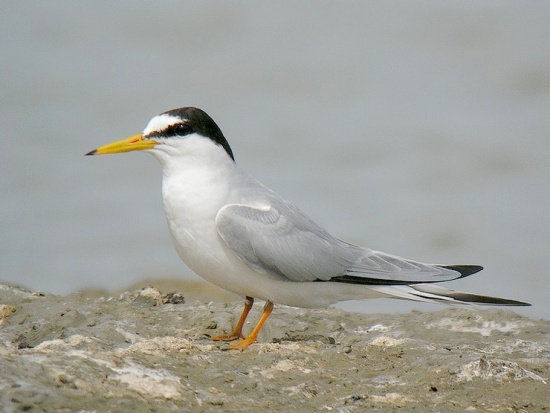 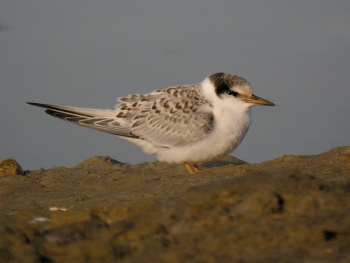 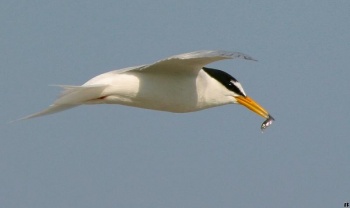 Least Tern has a greyer rump and central tail feathers, but is otherwise barely distinguishable on plumage; it does though has a distinctive 'squeaky' call (a vagrant Least Tern in a Little Tern colony in Britain was by far most easily picked out by this character, and was nicknamed 'Squeaker'[1]). Saunders's Tern in breeding plumage differs in less white on the forehead (not reaching behind the eye), grey rump, and three darker outer primaries; its legs are also darker reddish-orange. 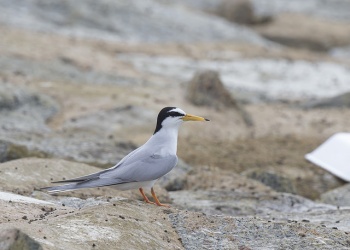 Little Tern is closely related to, and was formerly often considered conspecific with, Saunders's Tern S. saundersii of the northern Indian Ocean and Least Tern S. antillarum of the New World. Other close relatives include the Yellow-billed Tern S. superciliaris and Peruvian Tern S. lorata, both from South America. Like all these, it was formerly placed in the genus Sterna. 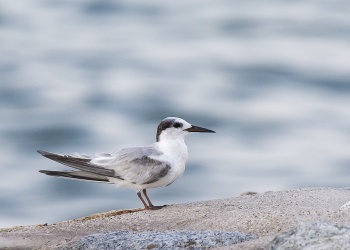 There are six subspecies[2]:

Sand, gravel or shingle coasts and islands; also inland on larger rivers and lakes. Breeds in small colonies, typically around 10–100 pairs. The nesting area will most often be located close to both the sea and to fresh water, but in some areas also found near freshwater such as rivers.

One to three eggs are laid on the ground. The nest is a scrape in the ground, usually on a shingle beach. The pair take turns incubating the eggs which hatch after 18 to 21 days. Chicks start to fly after 8 to 14 days but are not fully fledged until they are 28 days old.

Little Terns are fiercely protective of the eggs and chicks and will follow and harass any perceived predator.

Search for photos of Little Tern in the gallery

Search for videos of Little Tern on BirdForum TV

Read about the Little Tern Conservation Project at Baltray, Co. Louth, Ireland and view photographs on the Gallery