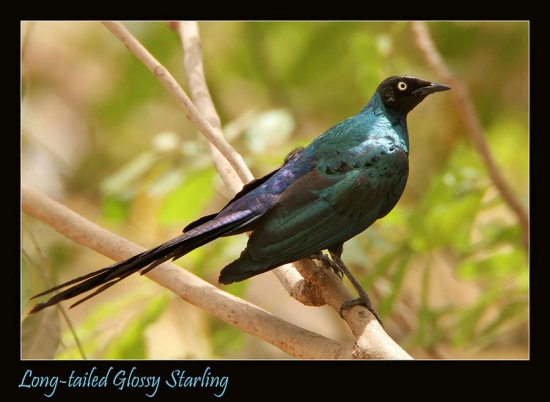 Photo by Scottishdude
The Gambia, March 2010

Sexes similar. Juveniles have no gloss and a dark iris.

Occurs in a narrow band from extreme southern Mauritania to northern Guinea east to southern Sudan and northwestern South Sudan.
Common in most parts of its range.

Feeds on fruit and insects. Forages mainly on the ground, hopping and walking.
Often leader of mixed-species flocks with Northern Red-billed Hornbill, Eurasian Hoopoe, Senegal Coucal and Yellow-billed Shrike.
Breeds monogamous but in a group. The nest is placed in a tree hole. Lays 3 - 4 eggs.
A resident species with some local movements.

Search for photos of Long-tailed Glossy Starling in the gallery