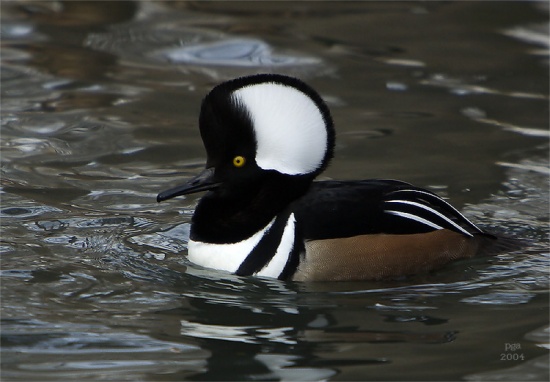 Male in breeding plumage is mostly black and white with only flanks orange-brown.
Female and non-breeding male are brownish grey overall. 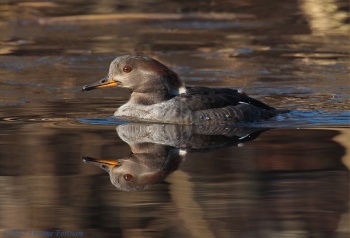 Like other mergansers, this bird has a long narrow bill which is mostly black in breeding male and brown with orange base in female.
Iris: starts as yellowish brown in juvenile becoming yellow in male during second year, but becomes more reddish-brown in the female. 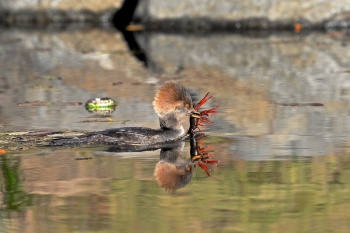 Most European sightings are likely to be escapes from wildfowl collections, though some (particularly in Iceland and Britain could be genuine vagrants. 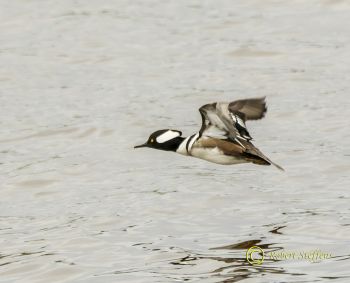 These ducks are uncommon in small flocks on sheltered ponds and bays, especially wooded ponds and swamps with standing dead trees. During the breeding season females build a nest in a dead snag much like the Wood Duck Aix sponsa whom they have been known to share nests with.

The tail of this duck is rather long and often held upright when swimming.

These ducks forage by diving in shallow water where they consume small fish, aquatic insects, and crustaceans (especially crayfish).

Females lay a clutch of 5-44 white eggs inside a tree cavity or nest box, this nest is lined with the downy feathers from the hen's chest. The chicks hatch with open eyes and are covered in down. Within one day of hatching the chicks leave the nest never to return.

Search for photos of Hooded Merganser in the gallery

Search for videos of Hooded Merganser on BirdForum TV