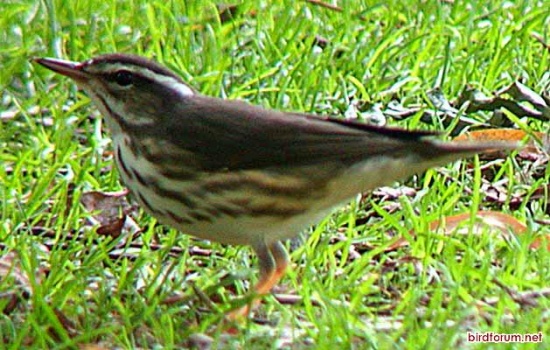 Breeds in the eastern United States from southern Minnesota east to most of New York, Vermont, and New Hampshire south to eastern Texas east to Georgia. Casual to accidental vagrant in the western United States.
Winters to Florida, the West Indies and northwest South America.

It was formerly placed in genus Seiurus.

Mature deciduous or mixed forests near rocky streams (only very rarely found near standing water). In migration found in a variety of damp areas near water.

It builds its nest on the ground along stream banks, hidden in the underbrush or among the roots of fallen trees. 4-6 white-creamy eggs with speckles, spots, or blotches of reddish brown are laid.

Search for photos of Louisiana Waterthrush in the gallery