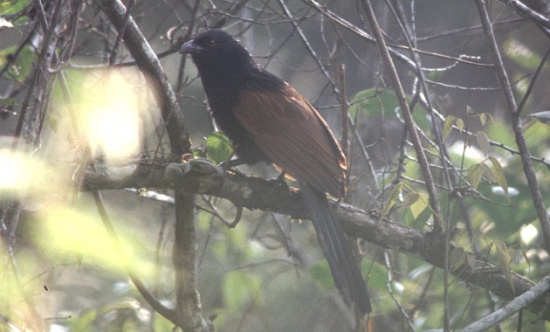 Sexes similar. Juveniles similar to non-breeding adults but more barred above and with short shaft streaks and barred wings and tail.

Assumptionis is sometimes included in insularis.
Sometimes considered conspecific with Black Coucal or even with Lesser Coucal.

Found in various types of forest, mangroves, marshy reedbeds, grass and gardens.
Occurs from sea-level up to 1800m.

Feeds on invertebrates, large insects, spiders, lizards, rats, chickens and eggs. Forages on the ground and in thick scrub. Often feeds in pairs, one bird defending the food against Crested Drongos.

Nesting recorded from September to March. The nest is a large domed sphere, made from dry grass. It's placed 1 to 4m above the ground in a dense bush. Lays 2 to 3 eggs. The male attends the nest.

This is a resident species. Resident.

Search for photos of Madagascar Coucal in the gallery