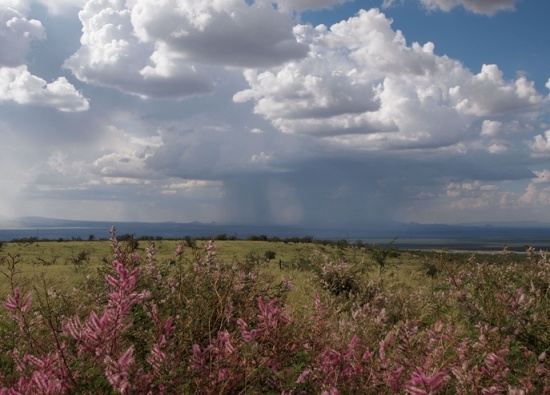 Located in southeast Arizona, Madera Canyon is a world-famous birding destination. It is located in the Santa Rita mountains, a relatively moist area for southern Arizona due to altitude; snow collects on the higher peaks to form streams and create a mixed oak and pine woodland. Its popularity results not only from the number and variety of birds that gather here, but undoubtedly from the fact that it is just across the border from Mexico, and thus is home to many species more common to the south. Americans who might hesitate to travel across the border can find excellent birding here in a more familiar culture. The Tucson area is a magnet in winter for migrating retirees escaping the cold to the north. There are other canyons in the Santa Rita Mountain Range that attract many the same birds, but this one is the most popular, with easy access, accomodations catering to birders, and excellent trails and public facilities managed by the US Forest Service. Also, most of the other canyons are heavily grazed by cattle.

The summer months bring by far the widest array of species, with many migrants from Mexico seeking the cooler temperatures in the mountains. The elevation at the Santa Rita Lodge, roughly halfway up the paved road, is 5000' (1525m). Hummingbirds are at their peak in summer, although some of the more desirable species are resident. In the winter, temperatures are still very comfortable for birding, but there may be snow at the highest elevations, and many of the more attractive birds have migrated south.

Birds that can be found here that are rare or absent to the north include: Arizona Woodpecker, Painted Redstart, Hooded Oriole, Red-faced Warbler, Yellow-eyed Junco, Elegant Trogon, Sulphur-bellied Flycatcher. This is one of the best spots to find several hummingbird species more common in Mexico, including the White-eared Hummingbird, Berylline Hummingbird, and Violet-crowned Hummingbird. Night birding is a highlight, especially in May, when the screech-owls, Spotted, and Flammulated owls can be heard or possibly seen. Please note that playing tapes of bird calls to attract birds is prohibited.

576 total species of birds, mammals, reptiles and amphibians are listed for the Coronado National Forest. 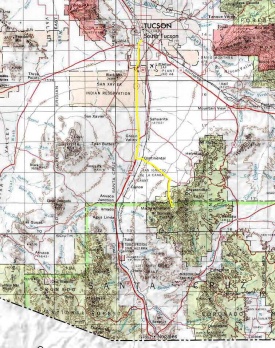 Drive south from Tucson, Arizona, on Interstate I-19 for 25 miles, or north from Nogales for 39 miles to the exit for Continental (Exit 63). Turn east under the Interstate and drive 1.1 miles to Whitehouse Canyon Road. A sign should direct you to turn southeast, after which it is about 8 miles to the Forest boundary at the mouth of Madera Canyon. The road continues up canyon for about another 4 miles to a turnaround at the Roundup Picnic Area. Many birders will park at the bottom and hike the trails along the stream, covering all the elevation zones from open grassland to pine forest. All roads are paved, but rather narrow; large vehicles are discouraged from going further than the mouth of the canyon, and parking in the canyon can be a problem on weekends.

Madera is the Spanish word for wood, and the name resulted from its early use as a timber source by settlers in the Tucson area.

The area along the creek from the mouth of the canyon to the end of the road (about 7 miles) is the prime birding area, with good (even paved) paths allowing access on both sides of the creek for most of its length. To see higher altitude species such as Elegant Trogon and Red-faced Warbler, one must start at the Roundup Picnic Area and hike one of the upper trails. Also of interest are hummingbird feeders at the lodging sites, notably at the Santa Rita Lodge, which maintains a large array of feeders, including seed feeders which attract passerines and ground feeders such as turkeys and doves.

Search for photos of Madera Canyon in the gallery