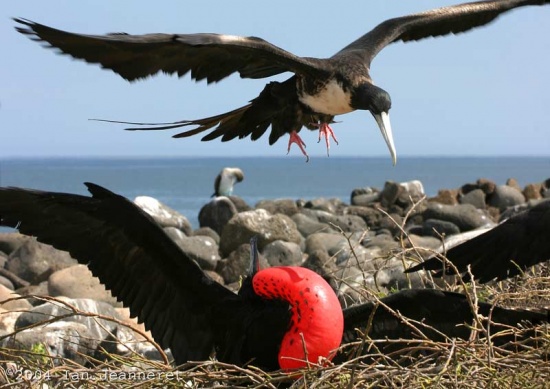 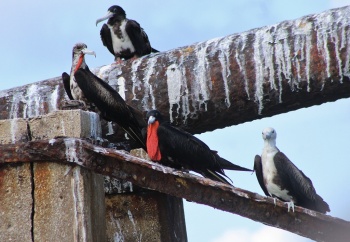 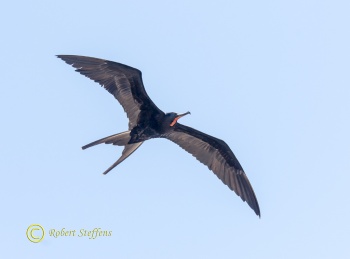 On a sitting female, black on the chin and throat makes a dark arrow pointing into the white breast, and on a flying bird, the border seems perpendicular to the flight direction. On a female Great Frigatebird, the white breast points into the black, almost reaching the bill. Up close, look for different color of eye ring
Adult male has different color gloss on mantle when seen up close, and lacks the paler line on upper wing usually seen on Great Frigatebird. If visible, leg color should be diagnostic.
Juvenile Great Frigatebird is usually yellow/orange/tawny on head and upper breast, but the lack of that is not a completely safe field mark for Magnificent.

United States; western Mexico; Central America; the Caribbean; northern South America to Brazil in the east and to Ecuador and Galapagos in the west; and on Cape Verde Islands.

Pelagic species; at sea, and commonly along coastlines. Is not bothered by human settlement, and may benefit from human activities such as fishing and fish cleaning.

Diet includes fish, especially flying fish, which are taken in flight. Will attack other seabirds to steal their catches or try to force them to disgorge their meals. Will also snatch offal, such as fish entrails discarded by fishermen, from the surface of the sea.

The male attends the nest for about 100 days, while the female stays with the single offspring for approximately another year; most of that time, the young stay in the nest. The female is therefore only able to breed every other year, while males may breed every year or maybe even more often in different colonies.

Search for photos of Magnificent Frigatebird in the gallery