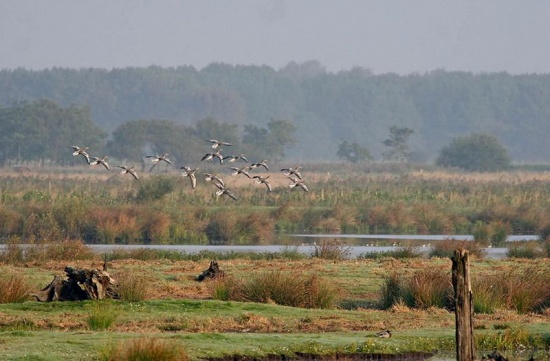 As well as a reserve of the Wildfowl and Wetlands Trust, Martin Mere is a Ramsar Site, Important Bird Area, Special Protection Area and Site of Special Scientific Interest. The site holds internationally important numbers of several waterfowl species in winter and covers 150ha of low-lying wet fields with pools and scrapes.

The surrounding area was once one of the largest bodies of freshwater in England but is now largely flat farmland with drainage ditches and scattered patches of woodland including Mere Sands Wood.

Although best known as a site for wintering geese and Pink-footed Goose in particular, Martin Mere hosts more than 500 each of Whooper Swan and Bewick's Swan, and thousands of Mallard, Common Teal and Eurasian Wigeon. The large numbers of Pinkfoots which can exceed 30,000, regularly attract other geese and Greater White-fronted Goose and Greylag Goose are regular with the occasional Brent Goose, Barnacle Goose and Bean Goose. Snow Goose also occurs but the origins of the scarcer species remain obscure. There are feral Greylag Goose, Barnacle and Pinkfoots in the area and Canada Goose is regular. Occasionally representatives of the smaller races of Canada Goose are recorded but whether they have a wild origin is unknown. Mandarin Duck is also often seen.

As there is a very extensive collection of captive waterfowl at Martin Mere any records of rare species remain suspect. All the regular dabbling ducks of northern Europe can be seen in this area in winter with species such as Mallard, Gadwall, Common Teal and Northern Shoveler staying on to breed. Other breeding ducks include Common Shelduck and Common Pochard and Garganey is a regular passage migrant.

Waders such as Northern Lapwing, Common Snipe and Common Redshank breed but a much wider range occurs on passage. Ruff, Black-tailed Godwit, Eurasian Curlew and Golden Plover, Ringed Plover and Little Ringed Plover occur in good numbers in autumn. Whimbrel are regular in spring and small numbers of Eurasian Dotterel are sometimes seen.

Martin Mere is good for raptors and owls in autumn and winter with Hen Harrier, Merlin, Peregrine Falcon and Short-eared Owl joining the resident Eurasian Sparrowhawk, Common Kestrel and Barn Owl. Marsh Harrier is becoming a more regular passage visitor, sometimes seen in midsummer. Common Pheasant and Grey Partridge and Red-legged Partridge can be seen on farmland surrounding the reserve.

Passerines include breeding Sedge Warbler and Reed Bunting, Eurasian Skylark and Meadow Pipit. During passage periods Yellow Wagtail can be very common along with flocks of hirundines. The Martin Mere reserve is also a reliable site for two of Britain's declining farmland birds, Tree Sparrow and Corn Bunting.

With such large numbers of birds and their watchers it is inevitable that rarities will frequently be seen and a number of vagrants, particularly from North America, have been recorded in the Martin Mere area. As well as the "Lesser" Canada Goose which may be of wild origin, Lesser White-fronted Goose and Red-breasted Goose have been recorded, also Green-winged Teal and American Wigeon.

Among waders, Nearctic species have included Pectoral Sandpiper and Lesser Yellowlegs and there have also been records of Franklin's Gull and Ring-billed Gull.

Vagrants from elewhere have include Collared Pratincole, Red-necked Phalarope and Mediterranean Gull. 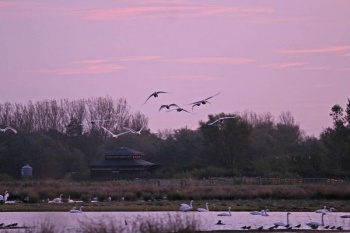 The surrounding farmland is best viewed from local roads and Plex Moss, between the A5147 and A565, is one of the best areas. 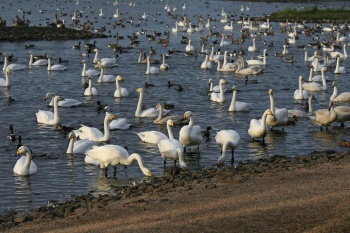 Like other WWT reserves Martin Mere is well signposted from all around and is difficult to miss. There is an entrance fee to non-members of the WWT and the reserve opens at 09.30 and closes at 17.30 in summer and dusk in winter.

There are all the visitor amenities such as shop, restaurant and information centre etc that we have come to expect from the WWT. Like the other WWT reserves Martin Mere provides an excellent family day out with the chance of some good birding.

Search for photos of Martin Mere in the gallery

Search for videos of Martin Mere on BirdForum TV

Suprisingly, some wild birds in summer were Pochards , Barnacle geese, Pink footed geese, whooper swans and White fronted geese all of which are meant to be almost always meant to be wiinter visitrs. Pros

Visited Martin Mere at end of October, 2006. Really needed more time than the 1 hour available to me that day. Saw my first Whooper Swan families, and lots of other migrants settling in for the winter. Excellent viewing from the two hides I visited. Also took a quick wander around the pens, and saw my first eider duck, so well worth the visit. Pity that the website doesn't have a plan of the reserve itself - if I'd known more about the size of the main lake and just how many hides there were, I would have given myself more time on the visit. Pros

There is a map on the website , just not that obvious look for blue writing on centrepage : 'Click here to see a map and some stunning images of what a visit to WWT Martin Mere has to offer ' Liverpool RSPB also have a copy of the map on their Website:www.rspbliverpool.org.uk

Best time to visit is probably winter, when all the whoopers have arrived. Spectacular against a winter sunset. The reserve is now larger and as you say an hour just will not do.

A year's WWT membership for an adult is �30, entrance then free to all WWT reserves, so if your planning further trips/visit other WWT centres it could save you a lot of money. Pros

Thanks for your note about the map of Martin Mere. I'd completely missed it. It took some time to download on my dial-up connection, and it's a pity that the map is buried in a pdf file, instead of being available separately and more quickly.