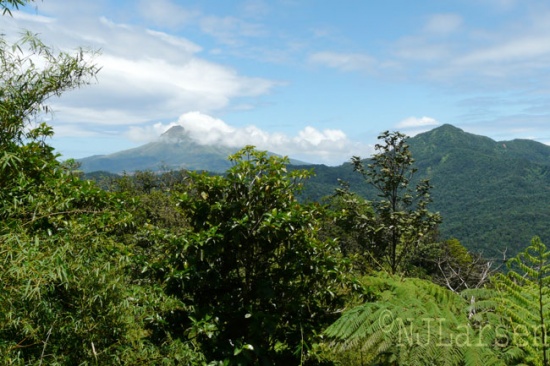 Roadside vegetation and view of north central mountains with Mont Pelée in the background.
Photo by njlarsen

Martinique Oriole is the only endemic species, while Blue-headed Hummingbird, White-breasted Thrasher, and Grey Trembler are each found on Martinique and one additional island. The local subspecies (Dendroica petechia ruficapilla) of Yellow Warbler has a rusty head and looks quite different from the subspecies on the nearest islands.

The above list is meant to exclude vagrants, but may still be incomplete regarding especially more common visitors. 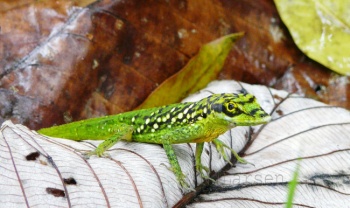 Photo of the endemic anole by njlarsen
Riviere Alma, Martinique.

Among reptiles, the anole Anolis roquet is quite noticable, most often with green colors. The poisonous snake "fer-de-lance" should be present but rare and nocturnal.

The montane area north of Fort-de-France known as Pitons du Carbet and the La Caravelle Peninsula are the most well known areas for birding. Blue-headed Hummingbird and Grey Trembler are best seen in the first of these, while La Caravelle is reputed as the easiest place to see White-breasted Thrasher. Martinique Oriole is found in forest in many parts of the island, but best in the wet forest north of Fort de France or in the drier forest south of FdF; it is no longer very common in the La Caravelle area.

Martinique has an international airport capable of receiving Transatlantic traffic. A ferry connects the island to Guadeloupe, Dominica, and St. Lucia.