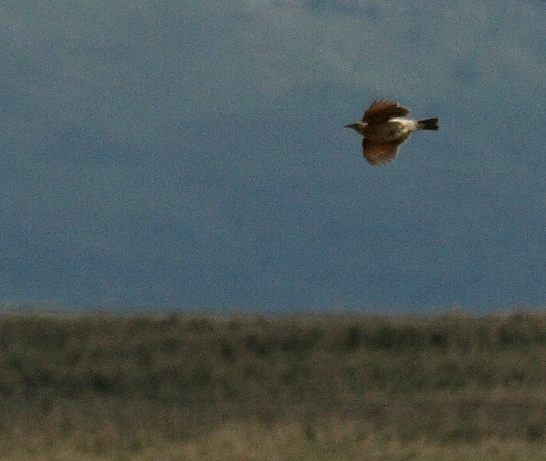 Length 12 cm, mass 20 g. Adult: A small lark with distinct whitish eyebrows that contrast with the brown crown and ear coverts. Mantle to rump pale brown with darker streaks. Tail dark brown, outer edges white. Wings dark brown, pale brown and rufous. Chin and throat white; remainder of underparts buff, with dark brown speckles on the breast. The pale brown bill is short and stout and the eyes are brown. The legs and feet are pinkish to flesh. Juvenile: Similar to the adults, but darker and more mottled above.

The song of the male in breeding season (see below) is usually the key to detection and identification.

Grasslands of east-central South Africa. There is a small, isolated population in central Zimbabwe.

The species is monotypic.

Listed as Near-threatened in the 2007 IUCN Red List due to loss of habitat to cultivation and degradation from over-grazing (Birdlife International, 2007).

Sings in protracted aerial display, usually high above the ground, or less often from a perch. Inconspicuous unless singing.

Forages alone or in pairs on the ground for invertebrates and seeds.

The song (of the male in breeding season) is long and rambling, incorporating a wide variety of chatters, trills, whistles and mimiced calls.

Search for photos of Melodious Lark in the gallery