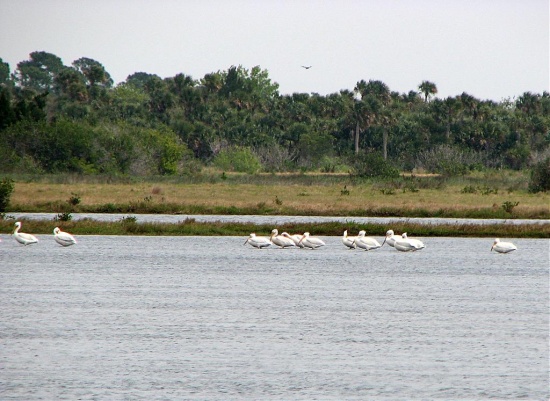 This unique site, covering about 140,000 acres, borders NASA's Kennedy Space Center and is home to more species of threatened and endangered wildlife than virtually any other of the USA's network of National Wildlife Refuges.

The barrier island has been managed as a refuge since the 1960s and hosts a range of birds in impressive numbers throughout the year. More than 330 species of bird have been recorded, 31 mammals, 117 fish and nearly 70 species of reptile and amphibian.

Throughout the year Merritt Island offers some of the best birding in Florida with birds such as Wood Stork, Roseate Spoonbill, ibises,Black-necked Stilt and various species of heron.

Blue-winged Teal, Northern Pintail, American Wigeon and Northern Shoveler are among the waterfowl present in winter and a wide range of shorebirds are also present. King Rail, Clapper Rail and Virginia Rail and Sora Crake occur in winter and raptors at this time include Osprey, Bald Eagle (both of which also breed), Red-tailed Hawk and Red-shouldered Hawk, Merlin and Peregrine Falcon.

A wide range of passerine migrants occurs, particularly in spring, and breeders include scarce species such as Boat-tailed Grackle, Florida Scrub Jay and Fish Crow.

This area is one of the most important in the USA for the rare West Indian Manatee and also for breeding sea turtles with Loggerhead Turtle, Green Turtle and perhaps Leatherback Turtle nesting on beaches. Alligator and freshwater turtles also breed in the refuge.

Merrit Island National Wildlife Refuge lies on the central-east coast of Florida and can be reached from Titusville and the Visitor Information Centre is situated about 7km east of Titusville on the SR 402 (Exit 80 off I-95).

The refuge has wildlife drives, hiking trails and boardwalks, observation towers and there is a manatee viewing platform at Haulover Canal on the SR 3. Merritt Island also manages four associated refuges: Pelican Island National Wildlife Refuge in the Indian River Lagoon, an important breeding site for pelicans and other waterbirds.

Archie Carr National Wildlife Refuge on the coast of Brevard and Indian River Counties, the most important breeding site for sea turtles in the United States.

I have been here several times and it is hit or miss off season. Best time would probably be in March or April. I was there last in September 2004, and I saw several Bald Eagles, many Osprey and other water birds. The travel way is hard dirt and well maintained. I also saw wild pigs and the largest deer I have ever seen. I'm from Massachusetts, so I know a big deer when I see one. This place and Ding Darling in Sanibel are two of my favorite places for photographing birds! Pros

The Merritt Island National Wildlife Refuge includes a Visitors Information Center, where the rangers are especially helpful. The Black Point Wildlife Drive (dirt road) is 7 miles long, and provides 12 stops which are described in more detail in their brochure. Habitats along the drive include salt marsh, mud flats, palm hammocks and pine flatwoods for your viewing pleasure. I have seen many herons, cranes, moorhens, ibis, hawks, and the like there. Another favorite area there is the drive past the Visitor Center into the Playalinda National Park. There are parking pulloffs along both sides, and often you can see birders with sophisticated equipment taking shots of the many water birds: this week I spotted 5 beautiful Roseate Spoonbills with 2 vans of birders from Britain, and an Osprey with a couple from Ohio. Pros

I went their during the Dusky Seaside Sparrow debacle when NASA decided to flood Merritt to solve the nasty mosquito problem that plagued workers at the launch facilities. When the water rose it took with it the nests of the Dusky Seaside Sparrow. If anyone can remember that far back. We looked everywhere for that bird and could find none except for a couple-hundred along the St. John's river. Then there was a fire during drought that swept through the nesting grounds leaving only 5 males, who were sent to Disney's Discovery Island, I believe. Their they died one-by-one until only 1 remained. Finally that one died and took with it the end of the Dusky Seaside Sparrow on this planet. It made plenty of obituaries in newspapers across America and the world. Enough about that, it can't be changed. If you visit Merritt, near Titusville, Florida, try and call ahead, or better yet find a local birder who can tell you when the birds are their. Also, go to NASA.com and cooridante your trip when they are not preparing for a lift-off operation. Other than that it is a beutiful sanctuary of many bird species. Pros