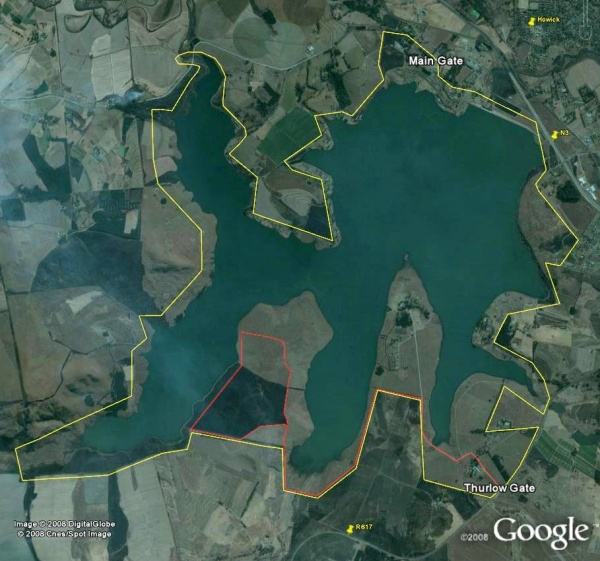 Map of Midmar; the red line is the game reserve road.
Created by Alan Manson

Midmar is a 2 857 ha resort operated by Ezemvelo KZN Wildlife at Midmar Dam, a large reservoir that supplies water to Pietermaritzburg and Durban. It is situated in the KwaZulu-Natal Midlands, about 24 km north-west of Pietermaritzburg.

The best birding is in the grasslands and wetlands of the Thurlow Park Game Reserve; this is situated on the southern shore of the dam. A drive that includes the grassland loop at the western end of the reserve will take 2-4 hours.

Grassland specials include Black-rumped Buttonquail, Short-tailed Pipit, Fan-tailed Grassbird (Broad-tailed Warbler), Stanley Bustard (resident and often fairly easy to spot), Blue Crane and Grey Crowned Crane. At night (or if you are lucky during the day) Marsh Owl and African Grass Owl may be seen. African Marsh Harrier and African Fish Eagle are also resident and Osprey and Amur Falcon may be seen in summer. Wing-snapping Cisticola are particularly common; Pale-crowned Cisticola and Quailfinch are also resident. Ground Woodpecker have been seen on the hillside above the loop road.

In winter, especially once the firebreaks have been burnt, different birds move in, including Sentinel Rock Thrush, Eastern Long-billed Lark, Red-capped Lark and Buffy Pipit. Sickle-winged Chat has been found after a particularly cold snap.

Animals and birds can be viewed from vehicles, cycles or on foot.

The moister grasslands and wetlands before the loop road are a good site for Yellow-crowned Bishop and Parasitic Weaver (Cuckoo Finch) (in summer).

Midmar Nature Reserve is situated off the N3 freeway, 24 km from Pietermaritzburg, and 7 km from Howick.

Accommodation (chalets and camping) and picnic and boating facilities are available on the northern side of the dam.

There are no public facilities on the southern side of the dam.