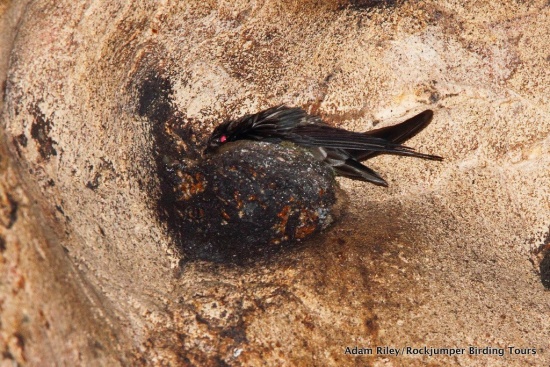 Taken at an eco-tourism project
Photo by AdamRiley
Gomantong Caves, Borneo, Malaysia, May 2010

From other Swiftlets in its range only identifiable in hand or at nest!

Found in South-east Asia on N Borneo (possibly also in the south), Java, W Sumatra and some small islands off Borneo and Sumatra.
Locally common or abundant. True status in some parts uncertain due to identification problems. One record from the Philippines.

Gregarious and often seen with other Swiftlets or Swifts.

Feeds on insects, taken in flight. Feeds at lower levels and closer to nest than Black-nest Swiftlet. Most active during dawn or dusk.

Nests colonially in caves, often together with Black-nest Swiftlet. Nest built with vegetable matter and held together with little transparent saliva, so nest is soft and moist. Lays two eggs.
Thought to be resident.

Search for photos of Mossy-nest Swiftlet in the gallery