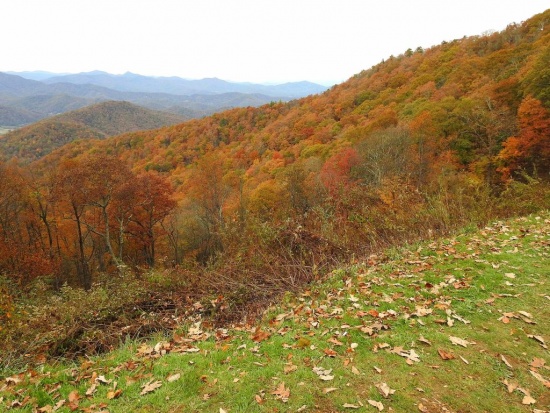 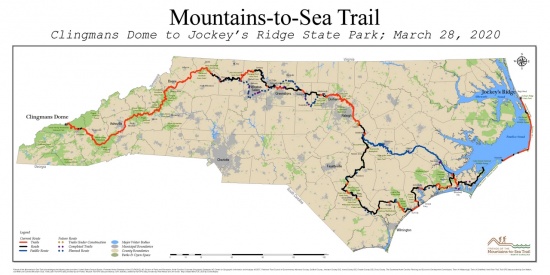 The Mountains to Sea Trail is an ambitious undertaking of significant proportions by groups of dedicated volunteers, sponsors, and the State of North Carolina.

One point, in the mountains of Western North Carolina, is at [Map 1]Clingman’s Dome[5] with it’s 6,643 feet above sea level elevation, and the other is at a rather large sand dune, [Map 2]Jockey’s Ridge[6], at an elevation of 100 feet above sea level, on the Outer Banks.

Thus the trail will literally run from the mountains to the sea, hence its name.

The MST will be a combination of actual trails, country back roads, and an option for paddling part of the route. It will wind through mountain habitat with the birds, wildlife, and plant life of the mountains. Then down into, and across, the Piedmont Region of North Carolina with its accompanying species of birds and wildlife. Then finally coming into and across the coastal region of Eastern North Carolina with its sandy soil, pine forests, lowlands, and waterways before crossing over the sounds and onto the Outer Banks.

The Mountains to Sea Trail will combine all of this into a fun and informative cross-section of what North Carolina has to offer when it comes to birds and birding, combined with a great new addition to hiking in North Carolina.

A listing of birding potential along the Mountains to the Sea Trail in North Carolina could easily be as long as the trail itself. So since the trail goes through each of the four primary regions of the state, let’s try it this way. Click on the name and link of the region in which you are interested. Or, if you want, all of them, and read what’s already there in those articles for the categories of “Notable Species", “Rarities”, and “Birds You Might See” checklist.

As the trail name implies, let's first start in the mountains. 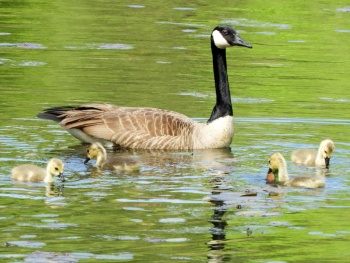 First look at Western North Carolina. Enjoy that region to your heart’s content as the trail winds its way through a rich and complex natural landscape. Maybe, just maybe you will get to see a majestic Bald Eagle as it soars above the mountains and forests. After all, it has been seen in all the counties in this region. If not, perhaps a Golden Eagle or Canada Goose will be your lucky check on your life list. Habitat varies here. Be ready for what comes your way. When ready, move on to the next leg of your journey.

Further east you'll come into the more agricultural lands of the Piedmont Region of North Carolina. Take in as many of the species of birds inhabiting the northern part of this region as you can as you walk this part of the trail. The Northern Cardinal is always a good possibility as is the Red-Winged Blackbird and Double-crested Cormorant. As you check off your last sighting here, know you have more awaiting you just down the trail.

Notice, as you come into the Eastern North Carolina region, you will begin to see an increasingly flatter, changing habitat indicative of a coastal plain, such as this. As you travel further, enjoy the changing landscape and different species of birds you may see here. One of the more common species here has been the Tundra Swan. Don’t rule out a Ring-billed Gull or a Snow Goose while you’re here. But, before you feel it’s time to conclude your journey, be sure to take a ride across one of the sounds and waterways you will probably see. Even more, awaits you on the other side. 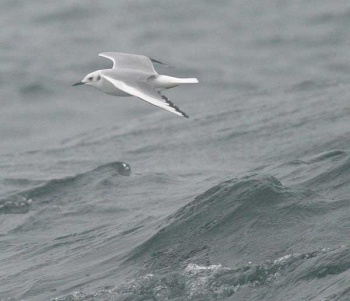 As you arrive on the Outer Banks notice your landscape will change to a region of sandy soil, sand dunes, marshes, and shorebirds, in addition to a myriad of wildlife. Maybe it will be the rarely seen American Coot, or the often seen Laughing Gull or Bonaparte’s Gull. Opportunities abound in this part of the state. Along this trail, as you come to the Atlantic Ocean, you will have covered, and discovered, a very large portion of what the state has to offer in the way of bird species and wildlife, as the trail name implies, from the Mountains to the Sea.

Wildlife, just as in thinking about birds, is largely dependent on which region of the state you happen to find yourself in. Your possibilities could vary from black bears and elk in Western North Carolina to deer and wild turkeys in the Piedmont Region, to more bears, more deer in Eastern North Carolina. Add into that a significant variety of small mammals from foxes and rabbits to reptiles across all the various regions. Just be careful, respect what you see, and you shouldn’t have any problems.

As far as history goes, the Mountains to the Sea Trail is a relative newcomer. It was first proposed in 1977 by Howard Lee who was then the Secretary of the North Carolina Department of Natural Resources and Community Development.

In 2000, it became a part of the North Carolina State Parks system as a State Trail

It grew significantly in 2017 when the State Legislature approved a major addition in southeastern North Carolina, and continues to grow, even now, with new trail sections being built. These new sections are then put into use to take the place of some of the trail which had been routed along back, country roads. An awful lot of the work is being done by a dedicated group of people who provide volunteer labor, use of private land for trails, donations, fundraising, and corporate sponsors. Should you choose to become a part of all this, you will find plenty of information on the trail’s and trail supporter’s respective websites.

Just like trying to pin down notable species of birds in a state like North Carolina, with it’s widely varying regions, is hard, so too is it problematic when trying to define areas of interest. So, in an effort to be as fair as is reasonably possible, let’s revisit each region separately. As we make our trek, click on the regional names for more information and keep your maps on the North Carolina State Trails[2] and Friends of MST[1] websites handy for reference. The Friends of the Mountain to Seas Trail site, with its extensive information on the trail and its segments will be very valuable.

Since the MST is, as its name implies, a mountain to the sea trail, we’ll start with Western North Carolina.

Western North Carolina, or as it’s frequently known WNC, is, by its very nature, a place of interest. There is so, so much to see and do in this part of the state that the problem isn’t finding something to do, but deciding which one to choose. Nature abounds in almost any corner of WNC. Birds of so many species, wildlife of every persuasion, and a multitude of places to enjoy it all. You can camp and enjoy it. You can day-trip and picnic. You can hike and enjoy it. And don’t forget the Appalachian Trail runs through here and connects with Mountains to Sea Trail in the Clingman’s Dome[5]area. Another icon of WNC is the Blue Ridge Parkway as is the Great Smoky Mountains National Park. All intertwined with birds, wildlife, and nature.

As a visitor to North Carolina comes down from the mountains; they enter the Piedmont Region of North Carolina. The streams that might have been trickles in the mountains become larger rivers and the rivers widen into lakes. But the opportunities for birding and enjoyment of nature still abound. The trails, both hiking and paddling, lead you to enjoyable sights. The MST crosses the northern portion of this region as it makes its way east and in so doing takes you at, or near, Pilot Mountain State Park and Hanging Rock State Park before turning somewhat southeast traveling at, or near, William B. Umstead State Park. You will have had the opportunity to see a cross-section of the bird species and wildlife the middle of the state has to offer as you prepare to enter into Eastern North Carolina.

Crossing into Eastern North Carolina, the grade will begin to level out the further east you go and the habitat will start changing to a sandy soil with stands of increasingly more prevalent pines and other similar trees. Birds and wildlife will start to change. Waterways and wetlands may become more common. There will be an increasing opportunity for game lands and wildlife reserves. When you get near Smithfield, you are at the point of deciding if you want to take the MST's alternate paddling route on the Neuse or continue on the trail. Either choice is sure to be a unique opportunity to spot some new bird species. Should you choose to continue on the trail, consult your trail guide for other opportunities.

As you come to the large sounds and rivers on your horizon, prepare to cross to your fourth and final segment of this great trek.

As you step foot onto the sand of the Outer Banks, prepare yourself to take in some vistas and experiences similar to what some of the initial settlers to the then New World might have seen. Birds of such a variety of species, both large and small, swimming and walking as to astonish you. Break out your field guides, binoculars, and get ready to be amazed. And while you are doing that, be aware of your surroundings. You are, after all, in the land where pirates might have trod. You might see still functioning lighthouses, experience herds of wild horses rumored to have been shipwrecked here from Spanish explorer’s vessels, and see some of the most natural lands still remaining.

Check out the wild ponies, lighthouse, and historic town at Ocracoke. Cape Hatteras area affords great opportunities for all kinds of birds. See where powered flight was first attempted by the Wright Brothers at Kill Devils Hill.

And before you turn toward home, check on the wild horses of Corolla.

All in all, you will be coming to what has to have been a great trip through a great state on a great North Carolina trail called the Mountains to Sea Trail.

Hope you have enjoyed the trip.

With the MST such a long trail covering the whole state from west to east, the best way to give you directions to it is to suggest you go to the Friends of the MST site and avail yourself of a guide to the portion of the trail you are interested in and then consult a road map or an online map service for specific directions.

However, once you are on the trail, there will be marks to give you direction. This is especially important should you happen to find yourself on a section where two trails are on the same path and one of them veers a different way. Familiarize yourself with those for the MST before you go and pay attention after you get there.

Due to the large numbers of people and groups involved with the MST, the best way to contact the applicable stakeholders is to suggest you go to one, or more, of the websites associated with the trail for information on how to contact the person involved with what you are asking about. There are a lot of means of contact to be had there.