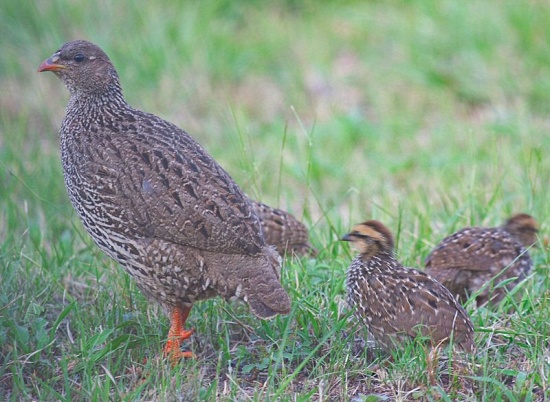 Adult: Overall brown, patterned with cream and black. Bill red with yellow base, and legs and feet orange. This is the only spurfowl in its range without bare facial skin. 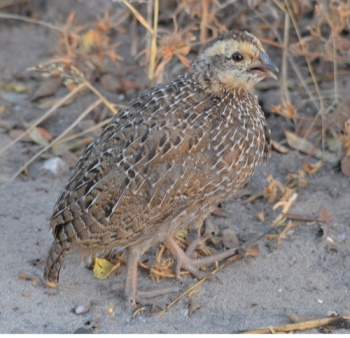 Three subspecies have been recognised, but the geographical variation is limited and clinal; several authorities regard the species as monotypic.
Formerly placed in genus Francolinus.

Dense thickets along watercourses, on hillsides and mountains, and in Acacia bushveld; coastal dune forest, edge of evergreen forest; often in rocky terrain.

Found singly or in groups of up to ten. Forages on the ground, usually under cover, in the early morning and late afternoon. Diet includes Molluscs, insects, roots, bulbs, fruit, seeds.

Breeding: Monogamous and solitary. The nest is a shallow scrape in the ground lined with grass, concealed in thick cover. Two to seven eggs are laid at any time of the year, peaking December to May in the south.

Search for photos of Natal Francolin in the gallery