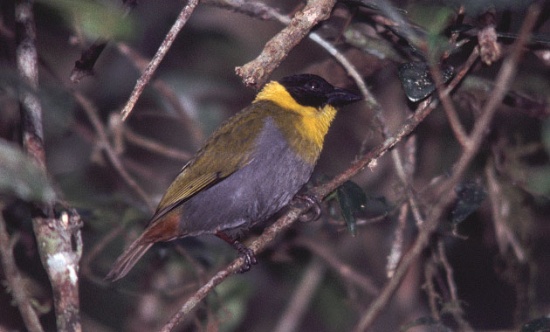 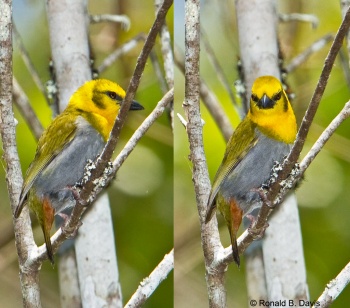 Females are similar but black on head is replaced by yellow, except for dark grey lores.
Juveniles have a greenish head with some yellow above the head and on throat and are generally duller than females.

This is a monotypic species.
Probably forms a superspecies with Sakalava Weaver and is sometimes considered conspecific with it.

Moist lowland primary and secondary forests. Also at forest edge and in gardens of villages close to forest.
Occurs from sea-level up to 1950m.

Feeds on insects and other arthropods like spiders. Takes probably also small fruits.
Moves through trees from canopy to lower levels, hangs below twigs and creepers while probing crevices. Forages usually singly or in pairs, often in mixed-species flocks with [[Long-billed Bernieria]s and other species.

Breeding season September to December. A monogamous species. Solitary breeding, nests widely separated. The nest is a bulky structure with an entrance tunnel leading to the oval nest-chamber. It's made of grass and palm fibres and placed 2 to 7 m above the ground, often suspendend over a stream, a path or a clearing. Lays 2 to 4 eggs.

Search for photos of Nelicourvi Weaver in the gallery