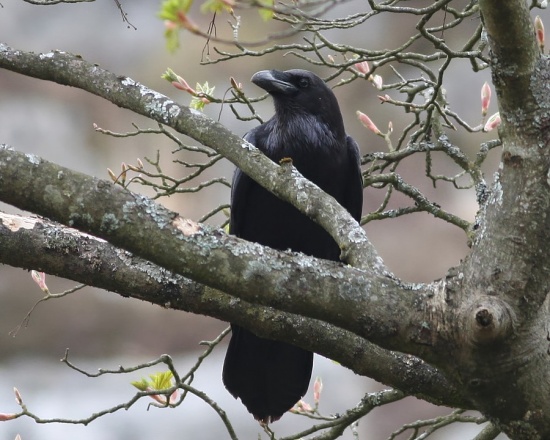 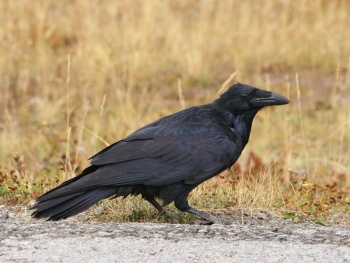 The largest of all corvids and of all passerine birds, 58-69 cm (23-27") long, with a wingspan of 120-150 cm (47-59") and weight of 600 g to 2 kg.
All-black with a purplish iridescence to its feathers. Tail long and broad, wedge-shaped. A powerful, thick "Roman nose" beak is distinctive. Both sexes similar; juveniles duller, less glossy, and with a pink gape when bill open.

Best told from the very similar Chihuahuan Raven of the American Southwest and Brown-necked Raven of north Africa and southwest Asia by range, habitat, larger size, and, most reliably, the grey bases to the feathers on its neck (usually only visible in windy conditions or when the bird is preening; white in Chihuahuan and brown in Brown-necked Ravens). Race C. c. varius of Common Raven also shows white bases to neck feathers, but range does not overlap. The Fan-tailed Raven of the Middle East and northeast Africa is more easily distinguished by its strikingly broad wings and short tail. In Ethiopia (where Common Ravens do not occur), the Thick-billed Raven is only marginally smaller than the largest Common Raven subspecies (overlapping in size); it differs in having a white collar patch, and an even thicker bill.

Ravens can also be difficult for novices to separate from Rook, Carrion Crow, American Crow and other crows at longer range; traditionally "if you're not sure if it is a Raven, it isn't one – but when you do see one, it's obvious". Best told from its smaller cousins by its larger size and wedge-shaped (as opposed to fan-shaped) tail. Shaggier appearance overall, with long hackles on the throat and a shaggy crown. Bill is thicker and more powerful then that of a crow. Wingspan is longer, wings broader than crows, with more emarginated primaries (fingers). Much more prone to soaring than crows, wingbeats and flight more like that of a buzzard. 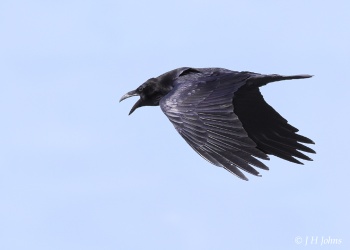 Found across Eurasia and North America, also extends into northern Africa. In much of Europe and the eastern USA it is expanding its range south following legal protection after historical persecution left it extinct in heavily populated regions; this recovery is slow or absent in some areas (e.g. the Pennine Hills in England) where illegal persecution by gamekeeping interests still occurs.

This is a polytypic species, with eight subspecies.1

Subspecies subcorax, canariensis, clarionensis and hispanus no longer recognized. The subspecies differ mainly in size; overall, larger birds occur in the north of the species' range, and smaller birds in the south. The largest are C. c. varius and C. c. kamtschaticus, the smallest C. c. sinuatus and C. c. tingitanus. Genetic studies have shown quite deep divisions within the North American birds6.

Very adaptable, able to survive in a wide range of habitats, from mountains to deserts to forests, though usually at higher elevations. Prefers wilderness regions, but slowly becoming conditioned to surviving alongside humans, in some cases even suburban areas. Increasingly seen in urban areas where historical persecution has ceased.

Very intelligent, considered by many to be the most intelligent of all birds. Recent tests indicate that ravens may actually use a form of logic, not just trial-and-error or instinct, that begins as a basic framework of concepts and is added upon and improved with age and experience, just like with humans. Has often been observed in complex social play activities, including repeatedly tobogganing on their backs down snow slopes.

Soars often, and with even more prowess and aerial finesse than a raptor. Quite playful, often observed exhibiting aerial manoeuvers (generally in pairs) ranging from barrel rolls to dives. Even observed flying upside-down, sometimes for significant distances.

Omnivorous, consuming a wide range of food items. These include carrion (its usual fare) and vegetable matter (such as berries and nuts), as well as small animals that may be directly captured, up to the size of rabbits, or even larger animals that are already sick or injured. Ravens were once known as "wolf birds", due to their tendency to follow large mammal carnivores to scavenge the remains of their kills; recent research has shown that Ravens will not only follow wolves, but will actively participate in leading wolf packs toward potential prey animals.

They mate for life. A stick nest is built on a cliff ledge or in trees.

Calls highly variable, but mainly croaking, resonating "Prrruk!" or "Kronk!", as well as bell-like calls. Most vocalizations are lower and hoarser than those of crows. Can be very loud, audible from up to 2 km or more. Common Raven voice clip
 Common Raven voice clip recording © by Silverwolf; An American Crow can be heard in the background.
More unusual recordings can be found in post 5 of this thread

Ravens have long been viewed as mysterious and shadowy, due to their black plumage, deep, varied voice suggestive of intelligent communication, and associations with death, notably carrion-eating habits after battles.

In Norse mythology, two Ravens, Huginn ('thought') and Muninn ('memory'), were associated with the god Odin, flying all over the world gathering information to bring back to Odin, with whom they could converse intelligently. A Raven also featured on Viking war banners.

Raven is also one of the principle spirits in Native American Folklore. Though often portrayed as trickster, Raven is regarded by some tribes as the "Creator", the spirit who formed the earth. Ravens are often prominent figures on totem poles of Northwestern tribes.

Well-known is the superstition from King Charles II's time that, with the absence of ravens at the Tower of London, the tower and the kingdom would fall. Today, several ravens are permanently kept on the grounds, and tended to by "the Ravenmaster"5.

Ravens are popular in literature, often to set a dreary or ominous mood. Ravens were one of the birds most frequently mentioned in the works of William Shakespeare, and who could forget the corvid's appearance in Edgar Allen Poe's great poem, "The Raven".

Search for photos of Common Raven in the gallery

Search the Gallery for videos of the Common Raven:

Search for photos of Common Raven in the gallery