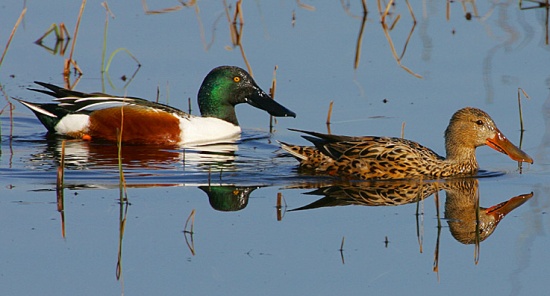 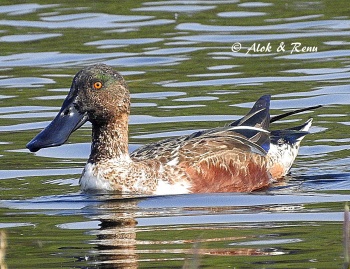 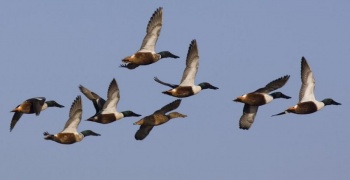 Females, and males moulting out of eclipse, are very similar to females and full-plumage males respectively of Australian Shoveler; the two species do not normally overlap in distribution, but vagrant Northern are known in the range of Australian, and need great care in identification. The plumage of the female is also similar to that of a female Mallard, the bill being the major distinguishing feature.

Breeds across northern areas of Europe, Asia and most of North America between roughly 40° to 65°N latitude. It is largely migratory, wintering across more southern regions of these continents, and also in South America and Africa south to around 5° to 10°N latitude; small numbers winter as far north as Scotland and British Columbia where mild oceanic winters allow some overlap with the breeding range.

It is a vagrant south to central South America, Australia, and South Africa, and north to Svalbard; it has also been recorded on the Azores, Madeira, the Canary Islands, and several Pacific Ocean islands.

The Northern Shoveler has recently been transferred, along with several other related, mostly large-billed ducks, to the genus Spatula. These were all formerly placed in the genus Anas.

It is not as gregarious as some other dabbling ducks in the breeding season, usually only forming small parties, but huge flocks can occur in winter on suitable subtropical and tropical wetlands (e.g. 110,000 in the Marismas Nacionales in Nayarit, western Mexico[2]).

Complex courtship display, when groups of males will head-bob to females, and perform frequent noisy aerial chases after females.

The nest is a shallow depression on the ground, lined with plant material and down, usually close to water.

Search for photos of Northern Shoveler in the gallery

Search the Gallery for Videos of Northern Shoveler:

Search for photos of Northern Shoveler in the gallery