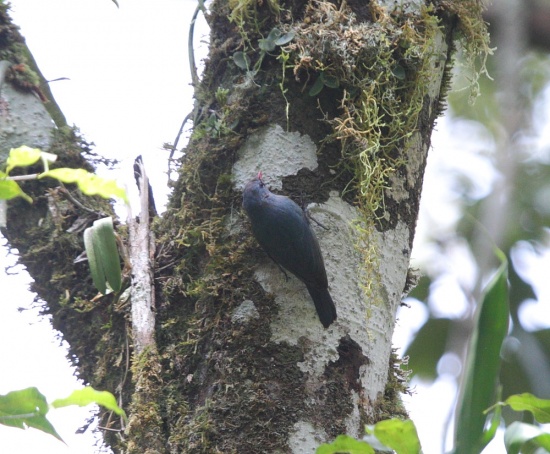 Juveniles are similar to females.

Endemic to north and east Madagascar.
Locally common in its restricted range.

This is a monotypic species.
The described form perdita, sometimes accepted as full species (Bluntschli's Vanga), is based on two juveniles found in a museum drawer. It might be just aberrant examples of this species.

Evergreen humid forest from sea-level up to 1800m.

Feeds on small invertebrates and small vertebrates.
Climbs tree trunks like a nuthatch, searching for food on bark.
Usually seen in groups of two or three birds, almost always in mixed-species flocks with other vangas, Madagascar Cuckooshrike, Madagascar Bulbul, Common Newtonia or Madagascar Paradise-Flycatcher.
Breeding season probably from August to September. One described nest was a cup made from live and dead mosses, attached to a tree trunk. No other information about breeding. A sedentary species.

Search for photos of Nuthatch-Vanga in the gallery