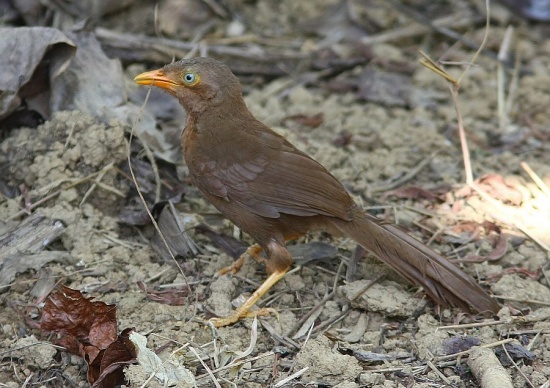 With 25 cm a medium-sized Turdoides-babbler:

May be confused with sympatric Ashy-headed Laughingthrush, but note bill and leg colour.

This is a monotypic species.[1]
In the past, it was considered to be a race of Jungle Babbler and may form a superspecies with it.

Its habitat is rainforest and deep jungle. Usually found in primary forest, only occasionally in secondary forest. Recorded up to 2100m.

Its diet includes insects, but also jungle berries. Forages in lower storeys of trees and in canopy. Noisy and greagrious, usually in groups of 6 to 12 birds, sometimes much more. Also in mixed feeding flocks. Breeding season from March to May. It builds its nest in a tree, concealed in dense masses of foliage. 2-3 deep greenish blue eggs are laid.

Search for photos of Orange-billed Babbler in the gallery