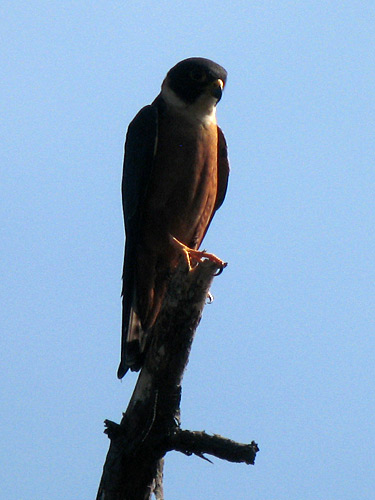 It can be found in eastern Himalayas and ranges to southern China, Hainan and south through Indochina to Southern Asia and Australasia.

It has been recorded as a vagrant from Malaysia. Also occurs in the Philippines, Sulawesi, Maluku, New Guinea and the Bismarck Archipelago. Rare in Java and Bali, a vagrant to Borneo and status unclear on Sumatra, a rare resident or vagrant. Has also been recorded on Gizo in the Solomon Islands. Resident.

A second subspecies, papuanus, is not recognised by all authorities[2]

It nests on cliff or building ledges or, more usually, in trees, using an old nest from other birds.

Its diet consists mainly of insects.

Search for photos of Oriental Hobby in the BirdForum Gallery