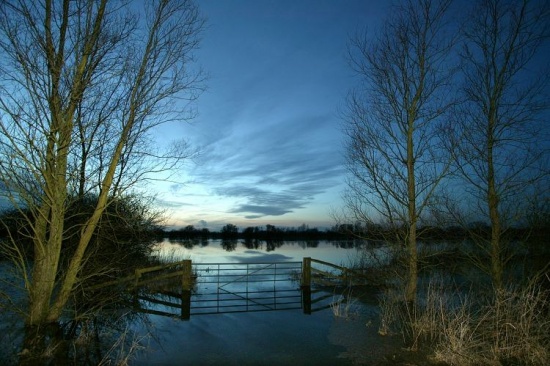 The wet meadows or "washes" between the new rivers continue to flood in winter and have created a 20km stretch of washland that is now internationally important for wetland birds. The amount of flooding varies from year to year and between areas of the washland with some parts under 1metre of water and others remaining damp grassland as much of the area is during the summer.

The rivers themselves, and the ditch systems between them, are important habitats as are the osier beds. These are cut in rotation so there is always a range of habitats providing nesting and feeding sites.

However, the most important breeders are Black-tailed Godwit, which although numbers have declined recently, have bred here since their recolonisation of Britain in the 1950s, and Ruff which have bred in varying, but always small, numbers since the 1960s. A recent colonist is the Pied Avocet which began nesting in 1996 and by 2002 more than 40 pairs were present.

The willows attract a range of species to breed including Little Owl, Stock Dove and Turtle Dove, Grey Heron and various passerines.

During winter floods the washes are of great importance for wintering waterfowl with more than 3000 Bewick's Swan and up to 600 Whooper Swan, the largest herd in England. Eurasian Wigeon can reach 40 000 and other ducks present in winter include the nine breeding species as well as small numbers of sawbills and grebes.

Common Kingfisher are winter visitors as are Hen Harrier, Merlin, Peregrine Falcon and Short-eared Owl and large numbers of gulls roost in the area. Passage periods see the appearance of various waders such as Spotted Redshank and Green Sandpiper, Wood Sandpiper and Common Sandpiper. Red-necked Phalarope is regularly recorded.

A good number of the commoner butterflies occur here and a range of dragonflies such as Broad-bodied Chaser Libellula depressa and Brown Hawker Aeshna grandis, and damselflies including Azure Coenagrion puella and Blue-tailed Ischnura elegans.

Otter Lutra lutra has been reintroduced to the Washes and other mammals present include Water Shrew Neomys fodiens and Harvest Mouse Micromys minutus.

In the 17th cenury two parallel rivers were excavated in an attempt to drain this area of its floodwater for agriculture. 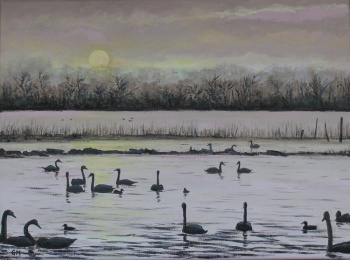 Photo by gmorgan
Acrylic painting of Welney at Sunset

The Ouse Washes are best viewed from the two major reserves, Welney Wildfowl and Wetlands Trust Refuge and the Ouse Washes RSPB Reserve.

Welney, a Wildfowl Trust reserve, is on the east bank in the northern part of the Washes and reached by a minor road which leaves the A1101 immediately before the bridge on the crossing to Welney village.

The RSPB reserve is on the west bank at Welches Dam and is signposted from Manea village which lies to the north-west of Ely and can be reached on the B1093 from Chatteris.

Both reserves are superbly equipped and have car-parks, visitor centres with toilets and observation hides.

Search for photos of Ouse Washes Reserves in the gallery

Search for photos of Ouse Washes Reserves in the gallery