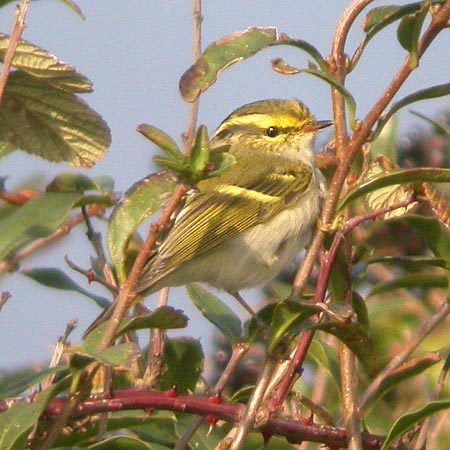 It breeds in southern and eastern Siberia (Novosibirsk east to Vladivostock and Magadan), northern Mongolia, and northeastern China (Heilongjiang, northeast Inner Mongolia). It is strongly migratory, wintering mainly in subtropical southeast Asia, from the Yangtze River in China south to Laos and northern Vietnam.

Prone to vagrancy as far as western Europe from mid October to late November, the 5,000-6,000 km distance from its breeding grounds being little longer than that (3,500-4,500 km) to its normal wintering grounds. For example, it occurs in late autumn in Great Britain regularly enough (up to 300 per year) that it is not classified as rare there. This is now considered to be an evolving new migration route, with birds using the mild oceanic winters of western Europe as a new wintering area[4].

Likely in the future to be split out (with the above relatives, and Yellow-browed Warbler and allies) into a new genus Abrornis[5]

Breeds in coniferous (fir Abies, larch Larix, pine Pinus, spruce Picea) forests or mixed forests with a high proportion of conifers, from sea level to 1,700 m altitude. On migration and in winter in more varied forest and scrub habitats.

The nest is built in a tree.

Search for photos of Pallas's Leaf Warbler in the BirdForum Gallery