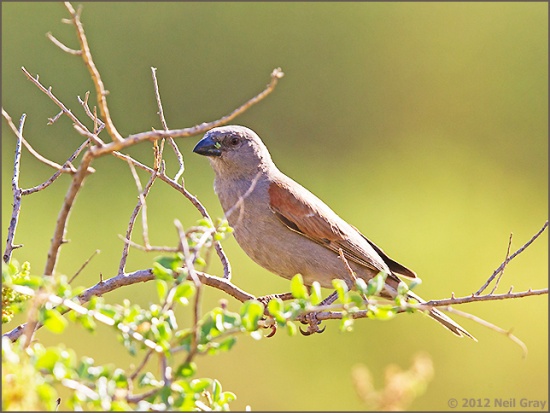 18cm (7 in). The largest of the African Grey-headed Sparrows:

Sexes similar. Juveniles are browner and they lack the white wing-patch.

Occurs in east central Africa in extreme south-east South Sudan, south Somalia, extreme eastern Uganda, most of Kenya and extreme north-eastern Tanzania.
Common in most of its range.

Open country and bush. In more arid country than other members of the superspecies.

Feeds mainly on seeds. Nestlings are probably fed with insects.
Forages in pairs or small groups, rarely in larger flocks.

Breeding throughout the year, coinciding with rains. The nest is an untidy dome with a side entrance, made of dry grass. It's placed in a tree, sometimes in a tree hole. May also take old nests of other species. Lays 2 eggs in Kenya, 4 - 5 in a study in Somalia.

No information about movements.

Search for photos of Parrot-billed Sparrow in the gallery