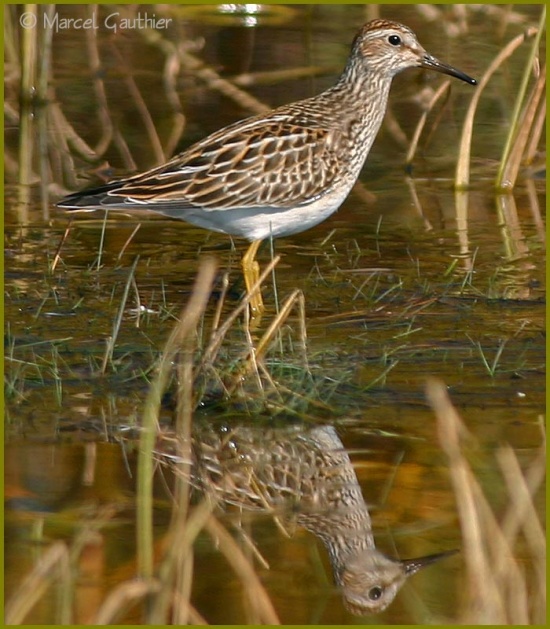 Sexes similar in plumage but male 25–30% larger in weight than female.
Juvenile: bill and feet are blackish-grey at fledging 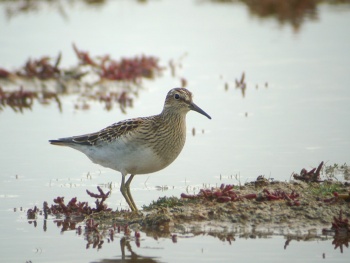 In autumn most migrate via the Great Plains during July-September but large numbers gather at staging areas in south-east Canada and the north-eastern USA before flying south over the west Atlantic to South America. These birds are liable to meet with eastbound depressions bringing them across the Atlantic to Europe. 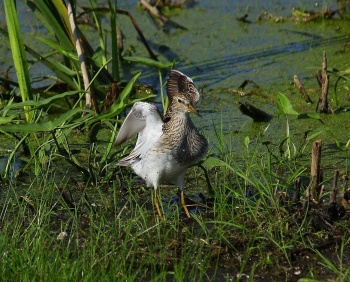 Spring migration is mainly in April-early May and via the interior.

This is by far the most numerous Nearctic wader to occur in Europe and has been recorded in many countries from Iceland and the Faroes south to the Azores and east to Hungary, Bulgaria and Romania, also in Morocco and Israel. Annual in the British Isles, the Azores, France and Sweden.

Over 100 records in the British Isles in some years, seen throughout Britain and Ireland with most in the south-west but significant numbers in the east suggesting a Siberian rather than North American origin for many birds. Recorded throughout the year but very rare in midwinter and dramatically peaking in September-October.

Freshwater habitats, coastal areas with damp grassland, marshland and the margins of ponds and lakes.

These birds forage on grasslands and mudflats, diet includes insects and other invertebrates.

On the breeding grounds, male will blow up the throat area so the feathers stand on end; this results in a much darker impression of this area than normal. Additionally, a throat sac is filled with air that is then let out again resulting in a rhythmic series of hollow hoots, usually given in a display flight given by the male.

Search for photos of Pectoral Sandpiper in the gallery

Search for videos of Pectoral Sandpiper on BirdForum TV