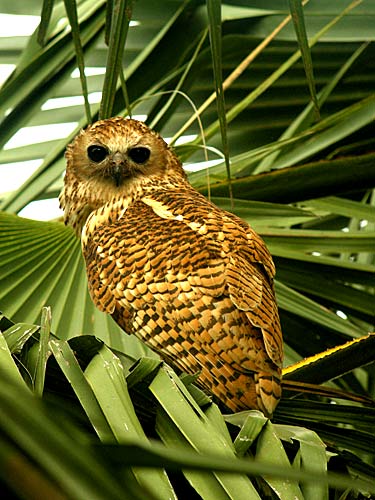 There is significant difference among individuals in how rufous they are. 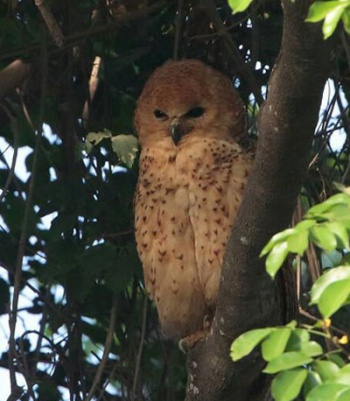 Rufous Fishing Owl and Vermiculated Fishing Owl both significantly smaller and with more streaking on underside. The first of these has darker rufous colors, the second has paler underparts, and they differ in color of eye and bill.

Some authorities place this species in genus Bubo (Scotopelia would then be a subgenus for the fishing owls).

Rivers with forests of overhanging trees, swamps, and lakes as long as mature trees are found. Inhabits locations from sea level to about 1700 m asl.

Unusually for an owl its diet is mainly fish. Baby crocodiles, crabs, frogs, and mussels are also taken. It hunts exclusively at night, swooping down on its prey with its huge curved talons.

Monogamous. Their breeding effort is timed to coincide with falling water levels, which means their prey is more concentrated when feeding the nestlings.

Mostly resident but moves as conditions change, e.g., when rivers dry out.

Search for photos of Pel's Fishing Owl in the gallery