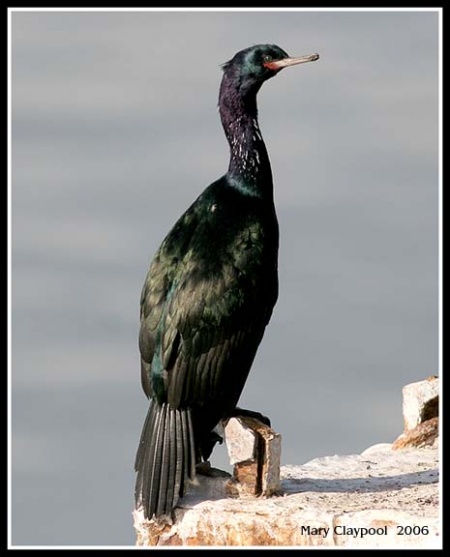 Immature is all dark brown. 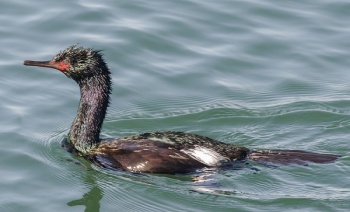 Brandt's Cormorant has a heavier bill, larger head, thicker neck but shorter tail. Brandt's has blue throat pouch most evident in breeding plumage framed in yellowish brown. Immature Brandt's is dark brown with a pale brown blaze across its chest. Double-crested Cormorant has a blocky head with orange throat pouch. Immature Double-crested usually much paler often whitish on belly and an all yellow bill. In Bearing Sea may be confused with much larger Red-faced Cormorant which has a pale bill, more extensive bright red facial skin and dark blue throat pouch. 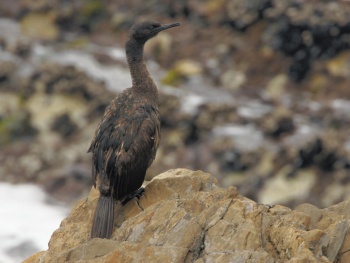 North east Asia, the Bering sea, and Alaska to the Baja peninsula in Mexico. 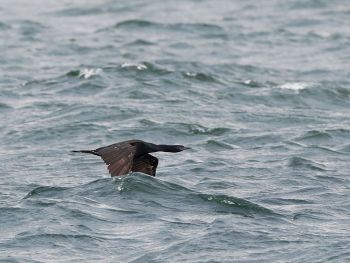 This is a polytypic species. Two subspecies are recognized[1]

Dives into sea for food.

It uses the same nest for several years; it is made of seaweed, grass and cemented together with its own guano. These nests can reach 5-6 feet in height. Nest typically situated on the ledge of a cliff on offshore stack or the mainland. Clutch of one to eight (usually four) greenish white to bluish eggs sometimes lightly marked with brown. Young must jump from the cliff ledge on their first flight.

Low groans, croaks, or hisses, depending on situation. Greeting calls differ by sex with females often giving a ticking sound like a grandfather clock.

Search for photos of Pelagic Cormorant in the gallery