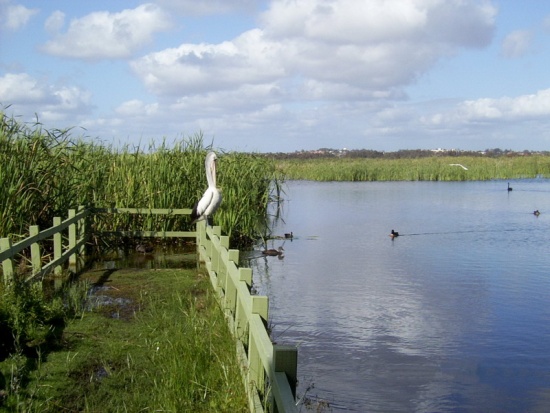 Perth is located in the south-western corner of Australia. It is the state capital of Western Australia.

Perth experiences a Mediterranean climate, hot, dry summers and cool, wet winters. The majority of the urban area is located on the coastal plain, between the Darling Scarp and the Indian Ocean. The CBD and much of the city lies on the shores of the Swan and Canning rivers and their estuaries.

The main native vegetation of the sandy coastal plain consists of Banksia heathland and Jarrah and Tuart forest. Much of the native vegetation has been cleared to make way for building, grassed parkland and pine plantations.

On the Darling Scarp (sometimes referred to as the Darling Range, but not an actual mountain range) Jarrah forest dominates on the hard, laterite soils.

Perth sits on the Swan River coastal plain. Many of the lakes and wetlands have been filled in and built over, but a string of large lakes remains, all are good sites for birds.

The northernmost of the large lakes in the metro area and the start of the Yellagonga Reserve. The main area for viewing is Neil Hawkins Park at the end of Boas Road. A scan across the lake from the small jetty will reveal various species of ducks, Black Swan, Australian Pelican, and a few waders. Raptors such as Swamp Harrier and Whistling Kite are common over the lake. You can walk north along the lake edge to a lookout point, there are often good bush birds along here such as Grey Butcherbird, Splendid Fairy-wren, Western Gerygone and Striated Pardalote. Despite signs discouraging such activity, many people still feed birds on the large grassed picnic area - most of these are feral - Rock Dove, Long-billed Corella, Short-billed Corella and Rainbow Lorikeet are abundant. A few natives join in the fun including Pacific Black Duck, Australian Shelduck and Australian Ringneck.

A little further south is Picnic Cove. This can be a good area for crakes if the water is low. There are also viewing spots dotted around the lake.

Jackadder Lake is a small lake to the north-west of Herdsman Lake. It's nice for a quick stroll around. Birds to look out for are Eurasian Coot, Australasian Swamphen, Dusky Moorhen, Silver Gull and various ducks. Three Caspian Terns have been seen here at one time, which is unusual.

The largest urban wetland in the world, Herdsman Lake is a mere 6km north of the CBD. The lake is largely covered in introduced Typha orientalis reeds, but these provide an excellent area for birds to hide and breed. It is about 5km around the entire lake, but walking a section still yields some great birding.

Gould League Centre - This is on the southern side of the lake at the end of Selby Street. Rufous Night Herons are often abundant in the nearby paperbarks as well as a variety of ducks in the water. It is not unusual to see 9 species of duck on an outing to this lake (Pacific Black Duck, Australian Shelduck, Australian Wood Duck, Grey Teal, Pink-eared Duck, Australasian Shoveler, Hardhead, Blue-billed Duck and Musk Duck). On the short walk to the east of the Gould League Centre, Australasian Bitterns have been viewed in early morning and evenings. Keep an eye out for Buff-banded Rail also on the grassed area.

The south-west corner has a bit of bushland where you can see a few bushbirds such as Western Gerygone, Yellow-rumped Thornbill and Rufous Whistler, as well as Rainbow Bee-eater in the Summer. This is also the best spot to view Chestnut-breasted Mannikin - a small introduced population lives at the lake.

After walking a short way up the western side of the lake (known as Floreat Water), you will come across a dredging barge. If the barge has not been moved in a while it should be covered in nesting Great Cormorants. The two small species of grebe are also common here.

Tiger Snakes can be found at Herdsman Lake. These snakes are highly venomous, but will not attack if left alone.

Lake Monger sits next to the freeway just north of the city and is slightly south-east of Herdsman Lake. This lake is considerably smaller than Herdsman and can be easily walked around. Most of it is bordered by grass parkland and introduced plants, but the eastern side has been re-vegetated and filtering channels have been built to clean up water runoff from the freeway before it enters the actual lake.

If you're short on time a walk along the southern edge yields the best birds. In the south-west corner is a small island covered in reeds. When the water level is low this can be a good place to observe crakes and rails. Black-fronted Dotterel are common here. Listen for the loud calls of Clamorous Reed Warbler in the reeds. If you are patient these small brown birds are quite easy to see here. When the water level is low a large expanse of mudflat is exposed on the western side, where you will probably see Black-winged Stilt and Red-necked Avocet. There are multiple signs around the lake discouraging bird feeding, but it is still prevalent, as well as dumping of domestic waterfowl, so Mallards, Muscovy Ducks and Greylag Geese are resident. Among the natives to be seen from the southern shore are Australian White Ibis, Australian Pelican, Black Swan, Blue-billed Duck, Pink-eared Duck, Australasian Shoveler, Australian Shelduck, Great Crested Grebe and large flotillas of Hoary-headed Grebes. Introduced Little Corella and Rainbow Lorikeets are abundant in the pine trees. An Australian Hobby also patrols this area so keep an eye out. The south-eastern corner where the filtering pond is, can be good for waders at the right time of year. Common Sandpiper live up to their name among Red-capped Plovers and Black-fronted Dotterels. 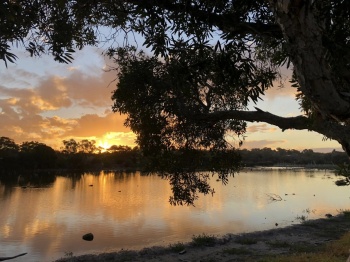 Claremont Lake on Google Maps This small ephemeral lake is an important wildlife refuge and the breeding location for many birds, both water dependant species and bush birds. For many years volunteers have conducted quarterly surveys of the lake’s bird life and have recorded over one hundred different species.

The many types of duck to breed at the lake, include Pacific, Pink-eared, Blue-billed, Wood, Shoveler, Hardhead and Shelducks. Several pairs of swans nest each year, as do large numbers of Coot, Moorhen and Swamphen and Stilt.

Breeding bush birds include Wattlebirds, Butcherbirds, Magpie-larks and Willy Wagtails. Bush birds are returning in large numbers following the closure of the long nine golf course and comprehensive replanting of native bush by the Friends of Lake Claremont, in association with the Town of Claremont. Welcome Swallows and Tree Martins nest under the roof of the gazebo.

The brochure “Birds in and around the Town of Claremont”, available from council offices, will help in the identification of different species. The Friends of Lake Claremont website covers the more commonly seen bush birds and water dependant birds. Follow this link: http://friendsoflakeclaremont.org/?page_id=2652

Please be careful not to disturb birds on nests and with young, and ensure that dogs are kept under control.

Boorgoon Lake used to be a prime breeding location for Cormorants but has now been taken over mainly by Australian White Ibis.

In mid 2008 a Dollarbird was observed here and at nearby Bluegum Lake for a few weeks before disappearing. This species had not been seen further south than Geraldton previously.

Water birds include Pacific Black Duck, Australian Shoveler, Shelduck and Eurasian Coots. Over 500 Black winged Stilts may be seen feeding out in the reeds while a small flock of Red-necked Avocets prefer the south east corner. Good numbers of White Ibis feed close to the shore.

An Australian Hobby may be seen hawking for flocks of Welcome Swallows and Tree Martins. Collared Sparrowhawk is resident and may be seen in the trees around the car park. Raptors also include Whistling Kite. A noisy flocks of Little Corella also hang around in the car parking area.

Singing Honeyeaters and Striated Pardalote may also be seen in the trees.

Viewing platform on west side and floating hide in the north-east of Bibra Lake.

Always has water; waterbirds and a few bushbirds.

As of June 2010 this lake is virtually dry, most of the waterfowl have moved to Bibra Lake, Herdsman Lake and Lake Monger.

Check the Paperbarks close to the Gould League Centre at Herdsman for Nankeen Night-Herons.

A large flock of Glossy Ibis may be seen feeding close inshore.

Good for a reasonable selection of bushbirds.

Alfred Cove is possibly the best spot close to Perth city to see migratory waders. During low tide a large expanse of mudflats are revealed. The surrounding reeds and the small amount of bushland also house various waterfowl and a few bushbirds. A spotting scope provides the best views of waders and waterfowl.

Park next to the building and oval on Troy Reserve and first walk east to the small viewing area over what is actually Alfred Cove. Buff-banded Rail are known to breed in the reeds next to the drain. In the trees you will find Striated Pardalote, Willie Wagtail and Rainbow Lorikeets. All three of these species nest here. From the viewing area look out for Black-winged Stilt and Common Greenshank on the muddy areas and among the reeds. A scan of the far shore often yields these species as well as rails. Little Black Cormorant and Little Pied Cormorant are usually sitting on the pylons in the water. Musk Ducks often display here, listen for the strange squeaking and plonking sounds.

Walking back towards the carpark you will notice on the river side that there is a tall structure. On top is an active Osprey nest. The Osprey used to nest on a radio tower, but a platform was erected for them to nest on when the tower was removed.

Low tide is the best time for viewing waders, but many birds can be seen at any time. As you walk along the river look out for Black Swan, Australian Pelican, Pied Oystercatcher, Red-capped Plover, Chestnut Teal, Australian Shelduck and Pied Cormorant on the sandbars. Some of the waders often seen here in Summer are Common Greenshank, Bar-tailed Godwit, Grey Plover, Red-necked Stint, Sharp-tailed Sandpiper and Curlew Sandpiper.

As you walk back you may see Australian Pipit on the grassed area. Unfortunately as human (and dog) activity becomes more prevalent, the number of bushbirds in the small of area of bushland is declining. However you can still observe Black-faced Cuckooshrike and Yellow-rumped Thornbills here.

Good for a few waders and also jaegers offshore, mostly Arctic especially in January. Also a few terns and the chance of a shearwater or something if it's windy. Early morning and/or weekdays recommended here.

Search for photos of Perth area in the BirdForum Gallery

Search for videos of Perth area on BirdForum TV

Thompson's Lake is virtually dry at the moment so most of the waterfowl are congregating on Bibra Lake, Herdsman Lake and Lake Monger. All three of those are well worth a visit. Check out the Paperbarks close to the Gould League Centre at Herdsman for Nankeen Night Herons, we counted twelve there a couple of days ago. There was also a large flock of Glossy Ibis feeding close inshore.