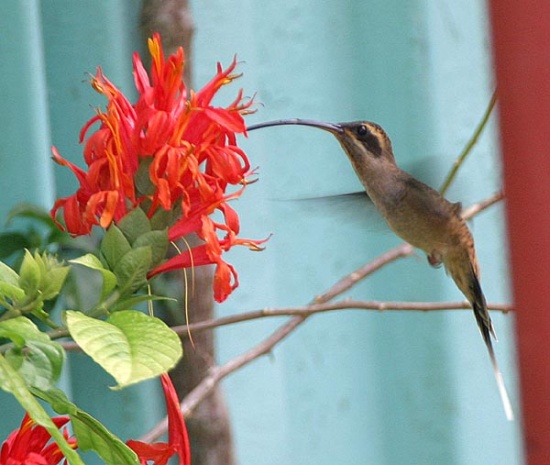 14-19 cm.
The bill is very long and decurved 2.5 to 3x the length of the head, with black culmen and lower mandible yellow (to flesh) tipped darker. The tail is strongly graduated and the central feathers are strongly elongated. Upperside generally described as bronzy green, but the birds from Panama (subspecies cephalus) have very little green on photos. Rump is washed in warm cinnamon. The upper side of the tail is very dark but each feather tipped buffy, whitish or grey depending on subspecies; the elongated central tail feathers have the extension either white or grey. There is a black mask from the auriculars, through the eye and covering the supraloral area, with white or buff stripes in front and behind, brown chin and throat but with white central stripe, underparts grey to buff to cinnamon in color. Upper wing coverts like upperparts, rest of wings blackish washed purple to maroon. The sexes are similar.

See other members of the genus Phaethornis.

Mexican Hermit is now split from this species. There is also a proposal that the subspecies P. l. baroni of western Ecuador and northwestern Peru should be raised to species status as Baron's Hermit. The second split has been rejected by the AOU, and is not recognized by the world-wide checklists.

Forest undergrowth, usually near water and its preferred food plants.

The female builds a conical nest of fibres and cobwebs suspended under a large Heliconia or banana leaf. 2 white eggs are laid and are incubated by the female for 14-19 days, with another 18 to 28 days to fledging.

The diet includes nectar, taken from large flowers; small insects and spiders taken as an essential source of protein. Hatchlings are fed by the female with regurgitated invertebrates.

Search for photos of Long-billed Hermit in the gallery