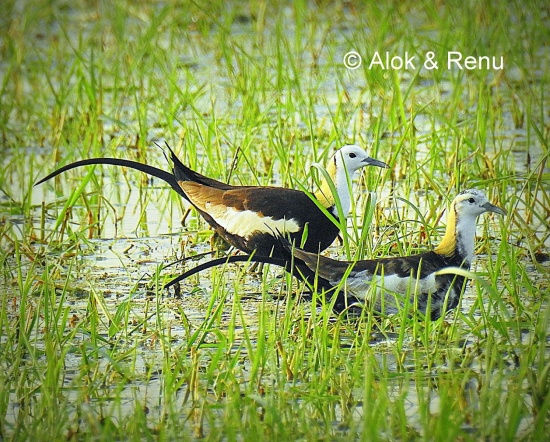 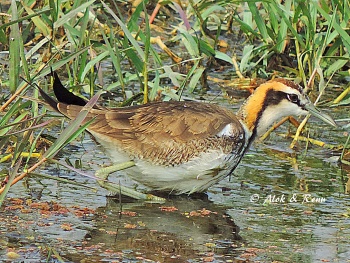 Grey legs and very long toes
Non-breeding adult lacks the long tail. White underparts, except for a brown breast band and neck stripe. The side of the neck is golden.
Young birds have brown upperparts. The underparts are white, with a weak brown breast band. 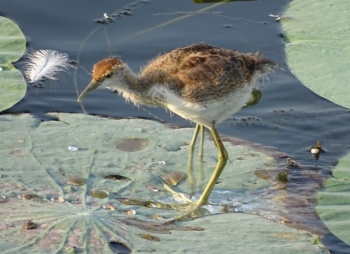 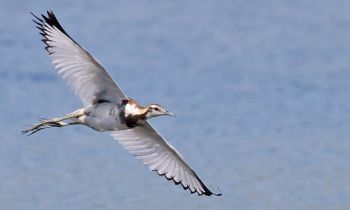 The female lays 4 brown eggs with black markings in floating nests. They are incubated by the male, who also cares for the young. The female mates with possibly up to 10 more males through the season.

Their diet consists almost entirely of insects and invertebrates. Gleaned from the water's surface or from floating vegetation.

Their call is a mewing me-onp and a nasal teeun.
In the following recording, can be heard four types of calls / song produced by a pair of Jacanas, feeding in the wetland and was dived and harassed by Red-wattled Lapwings and House Crows. Occasional calls by the latter two are also heard in the background.

Search for photos of Pheasant-tailed Jacana in the gallery

Search for videos of Pheasant-tailed Jacana on BirdForum TV