Despite its name this bird frequently appears to be far more blue than green.

Africa from Senegambia in the West, to Ethiopia and north-western Somalia in the East and then South to northern and eastern Botswana and central and eastern South Africa. 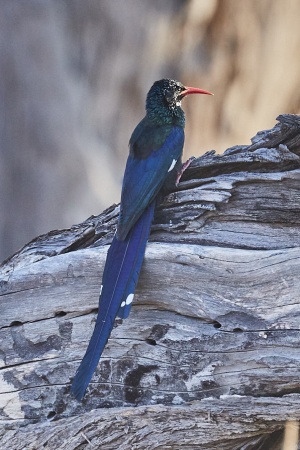 A wide variety of habitats, including savanna and woodland.

It is an agile, arboreal bird which clings to branches, often hanging upside down while it probes crevices in the bark looking for the arthropods which make up most of its diet. The birds are communal, traveling in noisy groups and protecting their territory.

Search for photos of Green Wood Hoopoe in the gallery