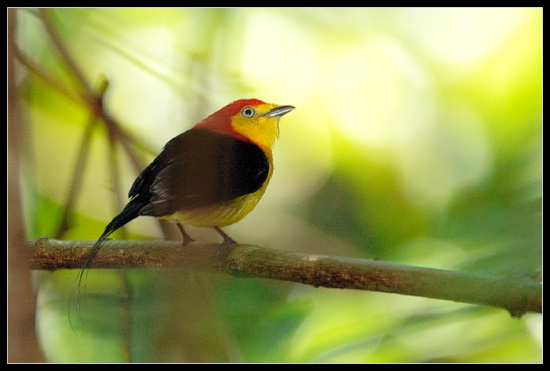 Easy to identify on field. Apart from the distinct colouration, it is the only manakin to have several long tail filaments. The female, as usual in the family, is olive coloured, however it also has the tail filaments, albeit shorter than those of the male.

The overall size is of 13cm, rather large for a manakin.

The Wire-Tailed Manakin is found widely scattered in western Amazonia. The eastern border of its range seems to be the right margins of the Rio Negro and Rio Branco (north of the Amazon River) and the left margin of the Rio Purus (south of the Amazon). The western border are the Andes. NE Peru, SE Colombia, E Ecuador, W Amazonian Brazil.

Often near streams or major rivers, in várzea or igapó open humid forests (seasonally flooded). They are also found in secondary growth and gallery forests. Stay at lower and middle storeys, but may venture into the canopy of fruiting trees.

The female builds a cup nest in small trees besides streams to lay and incubate eggs and raise the young.

Search for photos of Wire-tailed Manakin in the gallery

Search for videos of Wire-tailed Manakin on BirdForum TV