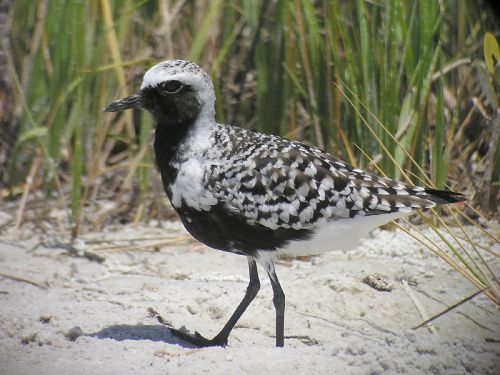 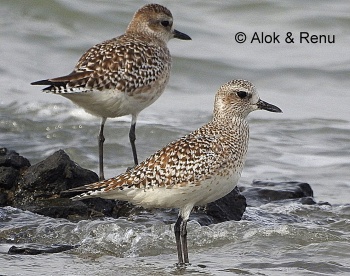 27–31 cm(10½-12¼ in)
A large, compact Pluvialis plover with totally white undertail coverts. Shows black axillaries ("wingpits") in all plumages and a big, strong bill. Has a tiny hind toe which the other Pluvialis plovers lack.

In breeding plumage has upperside metallic bicoloured back with black and white spots, and front black from eyes down to between the legs; the black area is adjacent to a broad white band from forecrown to upper breast, but the black area disappears behind the wings by the lower breast. Males have slightly more extensive and solid black than females.

In winter plumage shows streaking on breast and less strongly patterned upperside, which is rather coldly coloured. The supercilium is quite prominent.

Juvenile has streaked breast and pale cap, and can show quite strongly yellowish colours.

The other Pluvialis species (the three golden plovers) are slightly smaller with smaller head, thinner bill, and have dark tail, a less obvious or no wing stripe, and white or grey, not black, axillaries.

Breeds between 65°N and 75°N in the Arctic Tundra (north-eastern Europe, northern Asia and northern Canada). The non-breeding range includes almost all coastlines between 50°N and 40°S; also wintering north to 60°N in NW Europe. 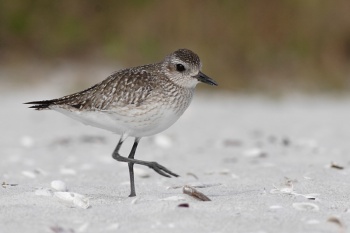 In the past, the species was occasionally split from Pluvialis into its own genus Squatarola, but this is no longer accepted[2].

Breeds in arctic tundra without trees, winters on muddy and sandy areas almost exclusively along coasts. 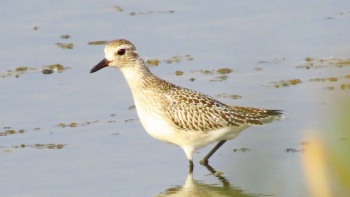 All Pluvialis plovers have a habit of occasionally lifting their wings straight up without actually flying off, which helps a lot with seeing the colour of the axillaries.

Their rather varied diet consists of insects, larvae and other invertebrates such as beetles. Also some plant material like grass seeds and stems.

Search for photos of Grey Plover in the gallery

Search for videos of Grey Plover on BirdForum TV