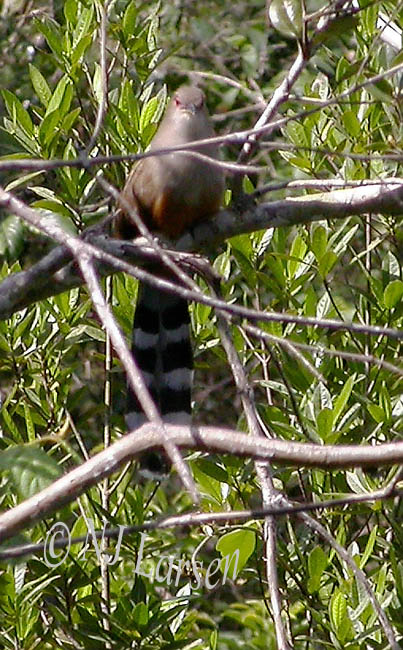 This is a large bird with a long tail; its underparts go from grey on the throat and breast to Cinnamon-rufous on the abdomen; the tail is patterned with white spots on black. Upperparts are brown-grey on the tail, browner on the back. The eye and the area surrounding the eye are both red.

Fairly common on Puerto Rico. A single specimen, presumably a vagrant, was collected on St. Thomas in the US Virgin Islands

From thick forest in the mountains and shade coffee plantations to the dry coastal forest around Guanica. Also found in the Haystack Hills of northern Puerto Rico.

The species can be observed slowly foraging the forest understory for lizards, its main dietary component (approximately 75%). Large spiders and insects are consumed to supplement its diet.

The species builds nests from twigs and lays from 2 to 3 blue eggs.

Search for photos of Puerto Rican Lizard Cuckoo in the gallery