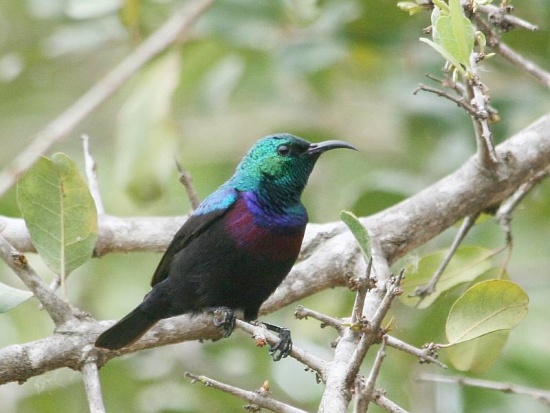 Length 11 cm, mass 7.5 g. Adult breeding male: The upperparts are mostly irridescent green; the upper tail coverts are irridescent blue. The tail is blackish brown and the flight feathers are blackish. The throat and the upper breast are iridescent green, separated from a 10-12 mm wide purple breast band by a narrower irridescent dark blue band. The belly is black. The bill is fairly short, and is curved along its entire length. Adult female: The head and upperparts are olive, the tail is blackish, and the flight feathers dark brown. The throat is dull yellow streaked brown, and the breast and belly are buff with diffuse streaking.

The Mariqua Sunbird is larger, and has a longer bill.

Central and eastern Africa from Gabon to Kenya in the north, and south to Angola and eastern South Africa.

This is one of the many Sunbirds that have recently been moved to the genus Cinnyris from the genus Nectarinia.

Food includes nectar, insects and spiders. They are found singly or in pairs, except when birds (up to several hundred in some cases) aggregate at good nectar sources. These Sunbirds move restlessly between food sources, males constantly chasing both females and other males of their own species.

Search for photos of Purple-banded Sunbird in the gallery

Search for photos of Purple-banded Sunbird in the gallery