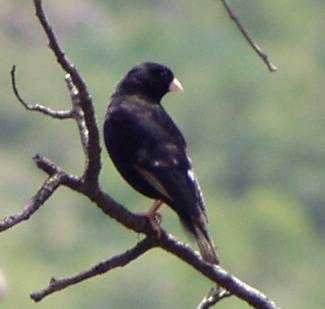 Length 10-11 cm, mass 13 g. Adult breeding male: Purpleish black to matt black plumage. The bill, legs and feet are white, pale pink or mauve, and the eyes dark brown. Female and nonbreeding male: Dark brown with rufous scaling above. The head is broadly striped buff and blackish. Off-white to buff below. The bill is greyish, and the feet and legs light pinkish grey.

The pale feet and legs distinguish this species from most other indigobirds, but in parts of Zimbabwe, Mozambique, Malawi and Zambia, the range overlaps with that of the northern race of the Variable or Dusky Indigobird Vidua funerea, which also has pale legs and feet. In these areas the two species cannot be distinguished in the field, other than by their song. The song of the Purple Indigobird includes imitations of the Jameson's Firefinch (its host), especially its 'fee' whistle and 'purr' alarm call. 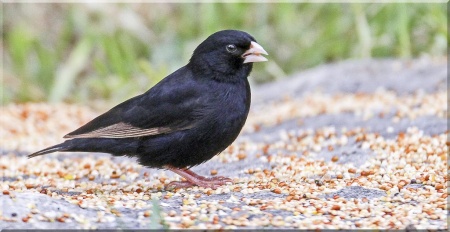 No subspecies are recognized, although there is regional variation in colour.

The Purple Indigobird is a brood parasite. Three to four eggs are laid in nests of Jameson's Firefinches, which rear the young.

Search for photos of Purple Indigobird in the gallery