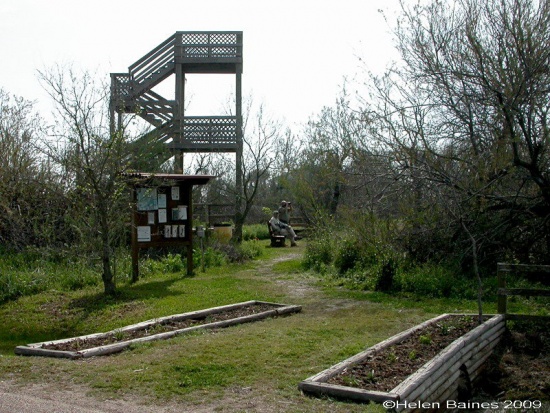 This is a small bird sanctuary, managed by the Gulf Coast Bird Observatory, on the Upper Texas Coast, close to the towns of Freeport and Lake Jackson. It is part of the Great Texas Coastal Birding Trail, site no. UTC 121. In the Spring and Fall it attracts neotropical migrants. There is easy access to beach front and jetties for additional birding from here. 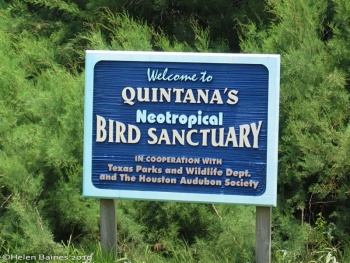 Photo by HelenB
Sign for the bird sanctuary, June 2010

Spring migrants, such as warblers, vireos, buntings, thrushes and hummingbirds often rest and recuperate for a few days here after crossing the Gulf of Mexico, in March and April. 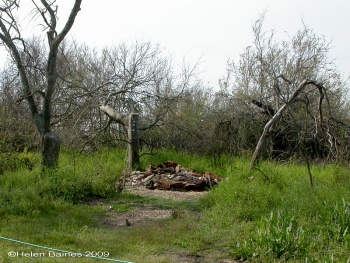 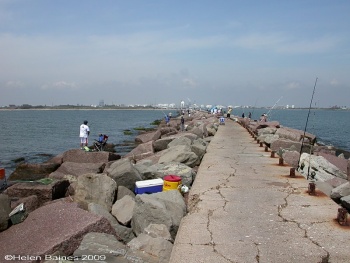 Photo by HelenB
Quintana Jetty looking back towards the beach, March 2009

Quintana, is an island located south of Freeport and Lake Jackson, between the mouth of the Old Brazos River and the New Brazos River. There has been a community here since 1532. The area is very industrial, with chemical plants and busy seaports. In 1994 the town of Quintana purchased a small tract of land, across from the Town Hall, with the help of a grant from Partners in Flight. It was an overgrown wood of invasive Tamarix, but has been improved by the addition of a nature trail, water features, benches and an observation tower, with the help of funds and volunteers from the local chemical companies. In September 2008, Hurricane Ike damaged the sanctuary and a lot of the tree cover was lost. Local volunteers worked hard to clean up the sanctuary in preparation for the busy spring migration season. 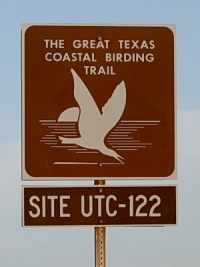 The sanctuary is open daily from dawn to dusk, all year. There is no entrance fee, but donations towards upkeep are appreciated. During the month of April, the Gulf Coast Bird Observatory will have staff at Quintana daily, during their "Spring Fling" event. A photo blind (hide) has been added to the features in the sanctuary.