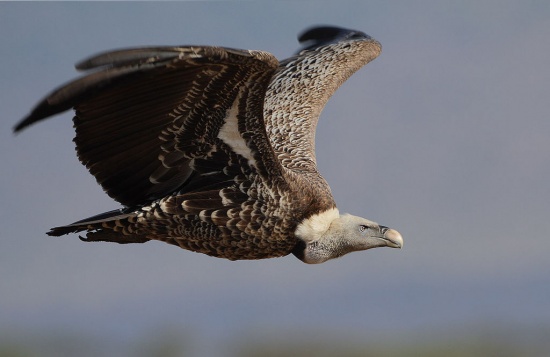 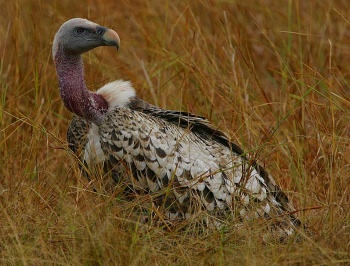 In flight as seen from below, notice the white line behind the front edge of the arm. 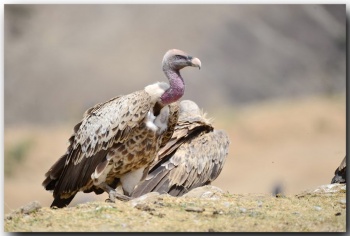 Eurasian Griffon is about 10% larger and with slightly wider wings. Cape Griffon is larger and White-backed Vulture smaller. Juveniles would be very difficult to separate from juv Cape Vulture.

Formerly very common over most of range, but, like all African vultures, now listed as Critically Endangered, due to a combination of habitat loss and illegal poisoning by poachers. Resident but some dispersal, possibly of immatures.

Reported several times in southern Egypt but few recent records, also recorded within the Western Palearctic in northern Mauritania. However, there have been recent records from southern Spain and Portugal including three birds in August-December 1987, and several reports of small groups in the 1990s and 2000-1. The origins of these birds are unknown but presumably they return from Africa with migrant Griffons. In 1998 a bird was seen, apparently nesting, in a Griffon Vulture colony in Spain. In October 2001 one was recorded at Cape St Vincent in Portugal. A bird caught and released in Drome, France in 2003 was thought to be an escape.

Arid and mountainous areas, particularly semi-desert and the fringes of deserts. They occur at heights up to 4500 m in Ethiopia.

They roost, feed and fly communally. Known to fly higher than any other bird, with one colliding with an aeroplane at 11,300 metres altitude over Abijan, Ivory Coast.

Search for photos of Rüppell's Vulture in the gallery